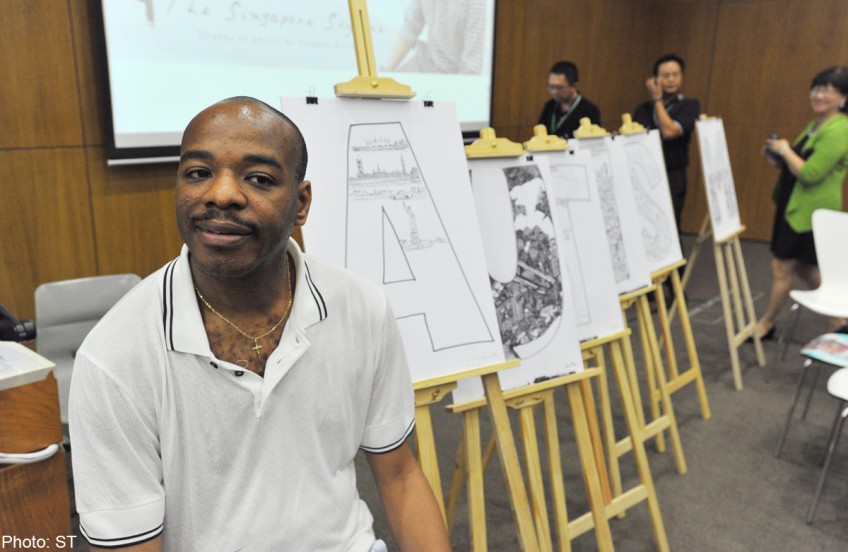 British architectural artist Stephen Wiltshire with the completed drawing of the Singapore cityscape on July 20, 2014 at The Paragon.

Mr Wiltshire was invited by Singapore Press Holdings (SPH) to draw the Singapore cityscape at Paragon from July 16 to 20, as part of its 30th anniversary celebrations. The artwork is SPH's gift to the nation, in celebration of Singapore's 50th birthday in 2015.

Mr Wiltshire's visit to Pathlight School, which is the first autism-focused school in Singapore that offers the mainstream academic curriculum, was initiated by SPH as part of its active corporate social responsibility efforts. Mr Wiltshire was diagnosed with autism at the age of three.

Led by Ms Denise Phua, who is also Supervisor of Pathlight School, the savant toured the school campus and signed on the school's "VIP Wall". He went to the school auditorium, where the students were given a short introduction of the artist and his works. Mr Wiltshire also sketched with the students from the school's Artist Development Program.

In addition to the visit, SPH has given exclusive rights to Pathlight School to produce reprints and merchandises from Mr Wiltshire's Singapore artwork to raise funds for the Autism Resource Centre. The merchandises will be available at a later date.

Limited edition replicas of Mr Wiltshire's Singapore artwork will also be sold to raise funds for this year's President's Challenge. Proceeds of the See the Big Picture limited edition tee shirts will also go to ChildAid. There are limited number of autographed tee shirts available for sale at $150 each. Those who are interested in purchasing the tee shirts can email SPH Corporate Communications at sphcorp@sph.com.sg.

For those who have missed Stephen Wiltshire's Singapore cityscape and exhibition of his past works at Paragon last week, they will be able to view the artworks at URA's Singapore City Gallery from September. More details will be announced at a later date.

[[nid:123779]]
SUBSCRIBE TO OUR NEWSLETTER
Your daily good stuff - AsiaOne stories delivered straight to your inbox