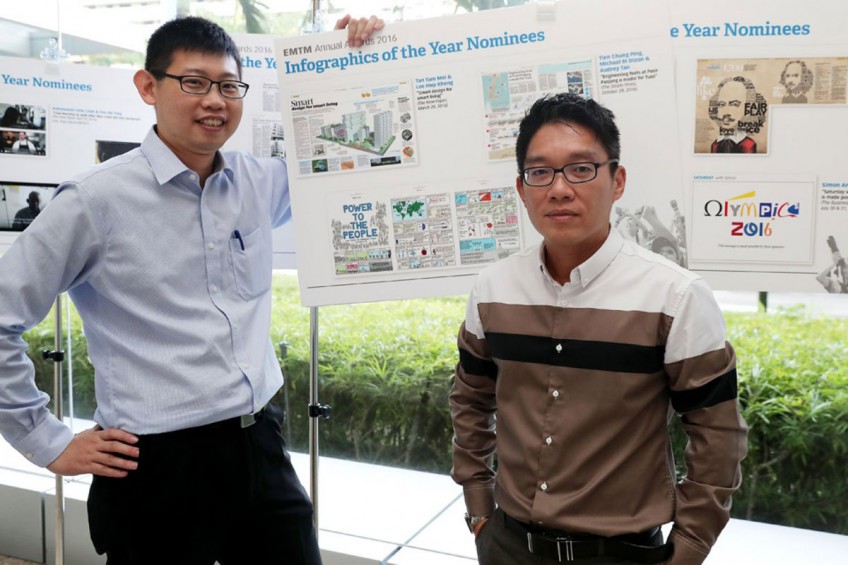 BT's Kenneth Lim (left) and Simon Ang, whose works picked up prizes at SPH's awards this year.
The Business Times

Senior correspondent Kenneth Lim won the Infographics Of The Year award for "Power to the people", a three-page comic strip on populism.

While he downplayed his win, insisting that his stick figures could not have won him an award, he said he appreciated BT's willingness to try out new ways to tell stories.

"Maybe one day, we'll report earnings in the form of a modern dance," he joked.

BT's other ribbon from this year's awards went to graphics editor Simon Ang, who picked up Illustration Of The Year with "Saturday with Simon: This message is made possible by these sponsors". The illustration depicted the phrase "Olympics 2016" using the logos of event sponsors, referencing a divisive rule that prohibits the use of trademarked Olympic terms and images except by the official sponsors.

BT editor Wong Wei Kong said: "We're really delighted to win both the Illustration of the Year and Infographics of the Year awards, and it affirms our efforts - started not too long ago - to excel in visual story-telling, even when working with subjects and issues that may not easily lend themselves to strong visuals. We are proud of both Kenneth's and Simon's efforts."

Story of the Year went to ST's Irene Tham for her story "Public servants' computers to have no Net access", about the Singapore government's move to tighten cybersecurity.

Speaking at the awards ceremony, SPH's EMTM editor-in-chief Warren Fernandez said that challenges in the news industry have not diminished, but that good journalism remained the core of SPH's business. Decisions over the past year to raise cover prices, merge the TNP and My Paper newsrooms, and to rationalise staffing levels were difficult but necessary.

In an age of disruption across multiple industries, the challenge for newsrooms will be to balance the three arms of its business - good journalism, good people and good financials. "Our challenge is to do all of these three things and get it right," he said. "If we focus on journalism, we will still run out of the resources to do the good journalism we want. If we focus only on financials, we will tarnish and compromise our reputations. We have to balance all of them."