The retailers have voluntarily undertaken to remove all advertisements proclaiming a "fire sale" at their outlets.

SINGAPORE - Residents that have recently visited ABC Bargain Centre, ValuDollar or ABC Express outlets will have noticed that the seemingly permanent "closing down sales" and "fire sales" signs are nowhere to be seen.

On Friday (Oct 16), the Competition and Consumer Commission of Singapore (CCCS) said that the owners and operators of the three retail outlets have voluntarily ceased the use of these advertisements from Sept 30.

In a statement, CCCS said that advertisements bearing such language convey the impression that discounts are offered because the business is closing down and that bargains are to be had only for a short while.

In September last year, The Straits Times reported that an ABC Bargain Centre outlet in Potong Pasir proclaimed it was having a "closing down sale" for a period of almost two years.

Noting that such advertisements were displayed continuously without reference to an end date at the three retailers' outlets, CCCS said they could mislead consumers into believing that there is a price benefit available for a limited period.

ALSO READ: Editors go budget shopping at stores they would never shop at

Misleading consumers in such a manner constitutes an unfair practice in breach of the Consumer Protection (Fair Trading) Act (CPFTA), said the consumer watchdog.

The retailers have voluntarily undertaken to remove all advertisements proclaiming a "fire sale" at their outlets.

If they know or should know that their products will continue to be available for a substantially longer period than advertised, they will also not advertise them as being available at a discount for a limited period of time, unless the outlet is genuinely closing.

When no genuine price benefit or advantage underlying the advertisement exists, the retailers also will not advertise their products as discounted.

In addition, they have to ensure their franchisees are aware of the advertising obligations as well.

The retailers have also agreed to cooperate with CCCS on an ongoing basis to ensure that advertising obligations are met and that they are in compliance with the CPFTA.

Read Also
How do budget shops such as ValuDollar earn money if everything they sell is so cheap? 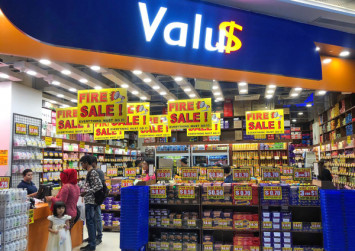 CCCS said it is closely monitoring other businesses that engage in similar unfair practices.

The commission also urged all businesses to review their business practices to comply with the CPFTA.

On Nov 1, the CCCS's guidelines on price transparency will come into effect. They provide more clarity on what constitutes an infringement of consumer protection laws, and set out the factors and circumstances that the commission may consider in assessing if advertised prices and related practices are potentially misleading.

Under the CPFTA, the CCCS is empowered to investigate errant businesses and file an injunction application against them. If they do not cease the unfair practice, they can be charged with contempt of court, which carries a fine of up to $10,000, up to a year's imprisonment, or both.