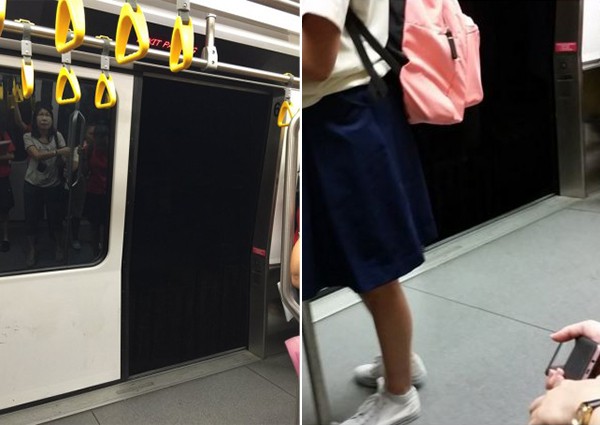 The door of an LRT carriage unexpectedly flew open while the train was still moving at around 6.45am yesterday (Jan 22).

Dilla Damitra, a 16-year-old student had tweeted a photo of the incident, showing the open door. The pictured has since received nearly 700 retweets.

According to her, the train had been travelling "slowly" from Bukit Panjang to Senja station when a sudden jerk caused it to stop moving abruptly and for the door to open.

Damitra told Stomp via a Twitter message: "When it jerked, the door unexpectedly opened and no one saw that coming. Luckily, no one was standing by the door at that point of time.

"The people around me was obviously in a shocked state because it was so sudden and I'm pretty sure this incident is the first time to happen."

Adding that the problem was resolved at around 7am, Damitra said: "One helper from West Spring Sec tried to use the helpline phone in the LRT for assistance but it didn't seem to work.

"So this one Art Teacher from Zhenghua Sec used her phone and called SMRT to report the problem."

No one was hurt in the incident.

Channel NewsAsia reported that SMRT staff had "boarded the affected train-car to check that passengers were safe, before closing the door and driving the train back to the station."