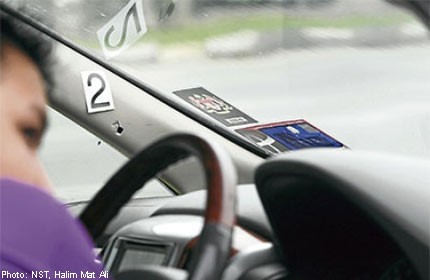 A policeman examining the businesswoman's multi-purpose-vehicle that was shot at in front of a restaurant.

KUANTAN - The decision by a 35-year-old divorcee to stop her car to make a call yesterday morning almost cost her life.

However, Ruzelawati Basri, who was shot by an unknown assailant while seated inside her multi-purpose-vehicle, escaped with minor injuries in the 4am incident.

Ruzelawati, who runs an optical shop here, was fortunate that the bullet did not hit her and instead pierced the driver's side window. She suffered cuts on her right eye from the glass fragments.

The incident unfolded when the mother of four, who had just filled petrol, stopped in front of a restaurant in Jalan Haji Ahmad, about 50m from the petrol kiosk, to call her former husband, who is in Putrajaya.

District police chief Assistant Commissioner Mohd Jasmani Yusoff said Ruzelawati was shocked when she saw a man, who had pulled up in a blue car, pointing a pistol at the driver's side windscreen.

"The man knocked on the window and told her to open the door. Fearing for her safety, the victim tried to speed off when she heard the sound of glass shattering.

"She panicked and drove for about 200m before stopping in front of a 24-hour restaurant."

Ruzelawati remained in the vehicle for more than an hour before seeking help from people in the restaurant.

It is learnt that a restaurant worker and several customers helped Ruzelawati. who lives in Lorong Sekilau here, to alert the police before sending her to hospital.

Jasmani said police would record a statement from her ex-husband, whom she divorced several months ago, as well as her workers.

"It could be a car-jacking attempt but we have not ruled out business rivalry and robbery. We will obtain the closed-circuit television camera footage from the petrol station.

"Besides the driver's side window, the bullet had also hit the vehicle's front passenger door panel," he said, adding that the incident was the first in the state capital here this year.

On July 25, a lorry driver from the Temerloh Area Farmers Organisation was injured in the arm when he was shot at a traffic-light junction near Felda Jenderak in Kuala Krau, Temerloh. The victim's lorry was earlier involved in an accident with another vehicle.

It was learnt that the car driver had trailed the lorry before firing two shots at the victim.

On July 15, several shots were fired into the house porch and at a car belonging to a 32-year-old businessman in Jalan Karak-Mentakab in Temerloh. No one was injured in the incident.