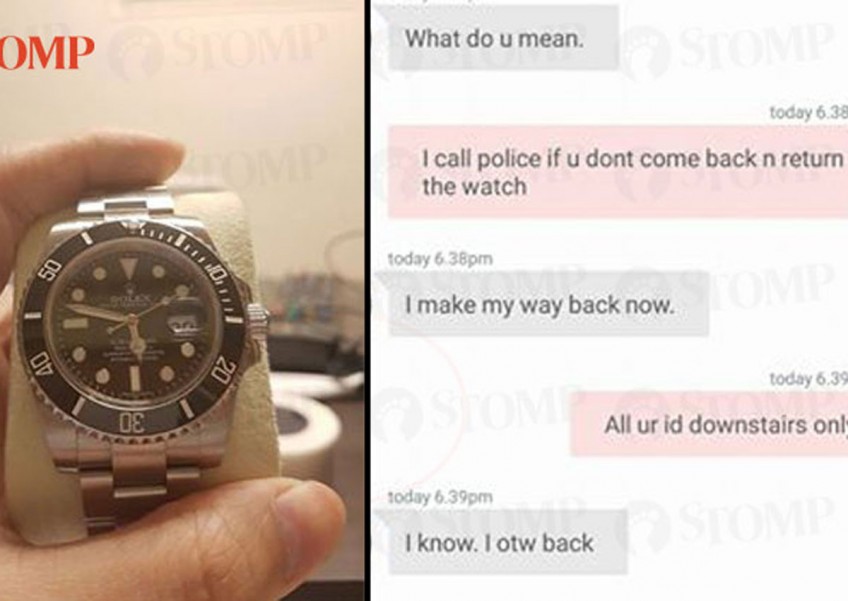 Stomp contributor Wafiy was happy when he found a buyer for his 2007 Rolex Submariner that he had listed on online marketplace Carousell for $8,000.

Little did he know that the buyer would attempt to scam him.

The Stomp contributor was warded at Singapore General Hospital following an operation, so he asked his mother to bring the watch to the hospital and arranged to meet the buyer, named Joseph, there on Sep 29 at around 6pm.

"He checked everything and looked like he was trying to authenticate my watch," said Wafiy.

"He wanted to check the serial number which is under the lug, where the watch bracelet fits, so he needed to take out the links."

"Suddenly, he said that the spring bar popped up and flew and dropped somewhere but assured me that it was okay and he will replace it for me or buy me a new one.

"I think this is when he tried to swap my watch with his watch which I assume is fake. It is also a submariner but with a thicker case and ceramic, which is not the same as mine.

"He then asked me to sign an agreement if I wanted to proceed with the sale and I did, thinking that he had the money with him.

"After I signed, he told me he would withdraw the money downstairs and I said okay. He left the watch box on the table and left.

"After a few minutes, he texted me again and said that he needed to withdraw on the other side of SGH and I said sure, no problem.

"I took the box and opened it up and at one glance I knew that it was not my watch."

Wafiy then proceeded to text Joseph that he knew it was not his watch.

He also recalled a similar incident that was reported on Stomp.

At first, Joseph expressed confusion and said, "What do you mean?"

Wafiy threatened to call the police if he did not come back to return the watch, and reminded him that his personal information was at the registration desk.

Joseph then replied that he was on his way back.

He added, "I think I accidentally linked my watch while clarifying. I otw back to you."

He also said that the watch he left behind was authentic and a 2014 piece.

"I won't wanna take yours and loss (sic) that. Lol.

"Come on bro, I won't be so stupid to identification (sic) myself if I wanna 'cheat' u. I'm a serious buyer lol."

When Joseph came back he told Wafiy it was his mistake.

"My bracelet had been swapped to his watch and my back case sticker had been pasted on his watch too...what a joker," said Wafiy.

"He was also using a different watch when he came in the first place which is a Rolex Daytona. Not sure if it's fake because I was not holding it."

Wafiy told Stomp that when Joseph arrived to switch back the watches, he then said he needed to go to the toilet.

"Before I could ask him why he did all this, he disappeared. I didn't see him again."

He added that he has since made a police report.