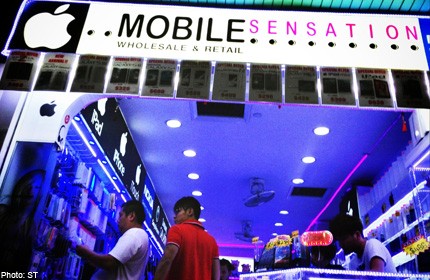 SINGAPORE - A mobile phone retail shop at People's Park Complex has been the subject of 22 complaints about dodgy sales tactics.

Mobile Sensation is said to have dangled ultra-cheap prices for its phones, but the sweet deals turned sour when buyers found they had to pay more money for additional charges such as monthly warranty payments. Others were told that the phones did not have the overseas coverage they needed.

Some hapless customers got worn down trying to sort out the mess and ended up agreeing to buy an older model as a compromise.

Mobile Sensation is one of five mobile phone shops at People's Park Complex in Chinatown that have between them racked up 39 complaints to the Consumers Association of Singapore (Case) from January 2010 to June this year.

The other shops are Sensation 2, S Team Mobile, Mobile Innovation and G-Tech Mobile.

One complainant is Mr David Toh, who told of how he was shopping for a phone for his wife and was attracted to Mobile Sensation's low price of $388 for a Samsung Galaxy Note smartphone.

Despite the offer being so cheap, "I did not suspect anything amiss as I had asked to confirm the price with a member of the sales staff before handing him my cash for the purchase", he said.

Mr Toh claimed that staff member later told him he would need to pay $35 for the warranty. He agreed to buy it as "the phone would still be cheaper than if I were to buy from a telco".

However, when he was asked to pay $1,260 for three years of warranty at $35 per month, Mr Toh realised that the deal was no bargain.

A Samsung Galaxy Note was retailing at around $550 at authorised telco shops, a price that includes a warranty of at least one year.

"My wife and I argued with the staff member for a long time as we didn't want to buy the warranty, but they refused to refund our money," said Mr Toh.

"In the end we were so stressed we agreed to top up $150 for a Samsung Galaxy S, even though it was an older model. We just wanted to get out of the shop."

Mr Toh ended up paying $538 for a phone which was selling for less than $300 at most shops.

Last week, with help from Case, he managed to resell the phone to Mobile Sensation for $350.

The 29-year-old Chinese national, who works here as an engineer, told The Sunday Times that he, too, was attracted by the low prices on display.

"I paid $780 for a Samsung Galaxy S II, only to be told that it was a local set and cannot be used overseas," said Mr Chai, who was later convinced to accept an older model, a Samsung Galaxy R, for the same price.

"When I got home, I found out that the model I was given cost $200 less in other stores. I returned to the shop immediately, but I was denied a refund of my money."

He later filed a complaint with Case and managed to get a refund of the difference in price between the two models.

Case executive director Seah Seng Choon said that Mr Chai could have demanded a full refund only if he had specifically told sales staff that he wanted a phone that could be used overseas.

Case divides the 39 cases at the People's Park Complex shops into different categories such as "misrepresentation" and "sales tactics".

Twenty-four cases fell into those two categories. The others involved failure to honour the terms of a sales agreement, overcharging and selling defective goods.

Mr Seah explained that an example of misrepresentation would be if a retailer had told a customer that a phone was new when it was in fact used.

As for bad sales tactics, this was shown in Mr Toh's case when the staff quoted an extra charge for warranty only after he had paid for the phone.

When The Sunday Times visited Mobile Sensation last week, many price tags had "terms and conditions" stated on them. When this reporter asked what the terms and conditions were, an employee explained that she would need to purchase between one and three years of warranty with the shop to buy the phones at the special prices.

Mobile Sensation retail manager Alvin Li, 27, said: "We are selling the Apple iPhone 5 (16GB) at a promotional price of $588 with a two-year purchase of warranty with the shop at $49.90 per month.

"As this is an export set, it will not be covered by Apple's warranty."

But an Apple spokesman told The Sunday Times that every new Apple-branded iPhone includes a one-year limited warranty and is enabled to work on networks using GSM around the world.

Five mobile phone shops at People's Park Complex in Chinatown have between them racked up 39 complaints to consumer watchdog, the Consumers Association of Singapore, from January 2010 to June this year. They are: