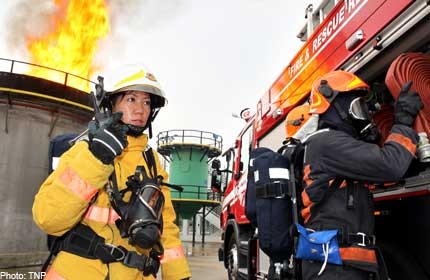 SINGAPORE - On her toughest day of training, Captain Anne Tan, 24, and her team recalled that on her toughest day in the course was an operation that her team were required to set up more than 200 hoses by hand and evacuate five "casualties" (90kg dummies).

"We call it Operation Long Lay On, and I knew it was like a rite of passage for trainees. It was difficult," she said.

She also became the second woman to win the "Golden Axe" award, an honour given to the batch's best trainee.

The previous female winner got the award 15 years ago.

Getting to the top was a challenge for Capt Tan, who joined the SCDF after getting a bachelor's degree in social science from the National University of Singapore. In January, she joined the tough 32-week course.

Capt Tan is not as strong as the male cadets, but she makes up for it with her stamina and never-say-die attitude.

"I do struggle a bit when it comes to brute strength, such as when I have to do heavy lifting," said Capt Tan, who is 1.64m tall and weighs 48kg.

Fellow cadets, such as Lieutenant Muhd Radi, 23, said Capt Tan was hardworking and inspiring to the others.

"During our exercises, we all saw that she constantly pushed herself. She always volunteered to help carry the hoses, winning our respect that way," said Lt Radi.

Training with her male counterparts had its quirks and challenges.

Capt Tan said: "I got stared at all the time, but that was to be expected in a male-dominated place. I took it as a compliment and let my ego grow a bit.

"But once you earn their respect and put on the fire-fighting mask, it doesn't matter if you are male or female, everyone is treated the same."

Her passion in helping others, which has seen her travel to Thailand, the Philippines and Nepal on relief missions, led her to the SCDF.

"I had a chance to pursue a masters in geography, but writing reports and academic papers aren't as fulfilling as what I did in my overseas trips," she said.

"I like helping others, but I rezlised that I can't perform more important roles if I don't learn command skills."

To become the best trainee, cadets must excel in all aspects of the Rota Commander Course.

In Capt Tan's case, she will be posted as a Rota Commander in a fire station, a role which puts her in charge of a shift of about 30 SCDF personnel, she said.

Her parents were surprised by her decision to join the SCDF.

Her proud father, Mr Tan Hock Huat, 62, said: "I was a little apprehensive as I thought that the training may be too tough. But I knew that she had set her mind on it, and after seeing her passion and determination, I encouraged and supported her decision."

Capt Tan is fully aware that the award is just the beginning.

"The award seems like a big deal, especially since I am female, but what it really means is that I cannot let my instructors down. I have a lot to prove," she said.