Caring for S'pore, driven by conviction 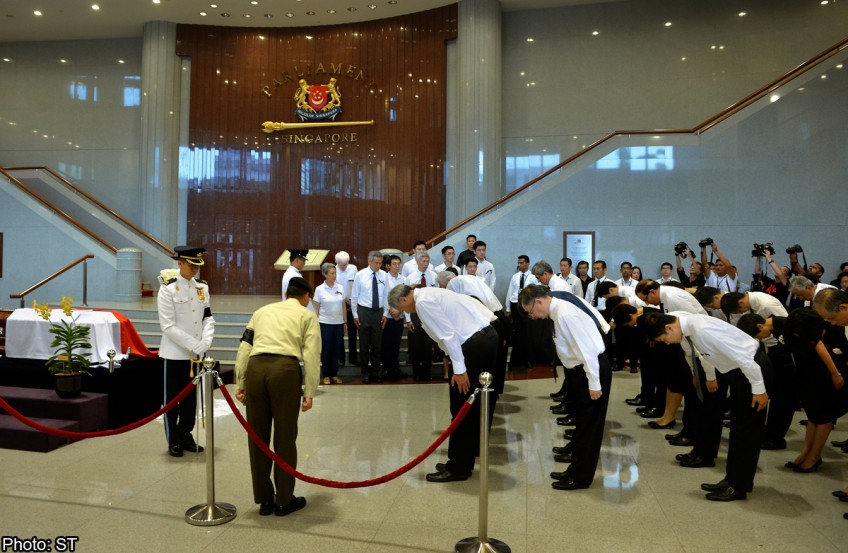 A NO-NONSENSE leader who focused on making Singapore better and improving people's lives. This was how Members of Parliament remembered former prime minister Lee Kuan Yew yesterday, in a special sitting of Parliament to pay tribute to him.

Mr Lee, who died on Monday at the age of 91, did not have time for flattery or silver-tongued politicians, said Leader of the House Ng Eng Hen.

"For Mr Lee, the acid test was whether the idea or proposal would make Singapore stronger," said Dr Ng, who is also Minister for Defence.

If the idea weakened Singapore's foundations, Mr Lee would reject it, said Dr Ng, "even if it was politically incorrect to say so and attracted widespread criticism".

"If it would make Singapore better, then no obstacles, no preconceived notions, no preset habits were too deeply entrenched to uproot or overcome...That was the Lee Kuan Yew the world knew and respected throughout his political life."

Yesterday, the House was packed with MPs mostly dressed in black and white, and wearing a black ribbon. A bouquet of white flowers was placed on Mr Lee's vacant seat.

Eleven MPs, including Dr Ng, spoke and paid tribute to the founding father's many achievements.

MPs later rose for a minute of silence as a mark of respect to Mr Lee.

Dr Ng also said that many of the former prime minister's early policies were painful and unpopular, as the MPs on the ground knew. Crushing labour unions, extending work hours and conscription were among these policies.

He noted how in 1968, Mr Lee said: "If we were a soft community, then the temptation would be to leave things alone and hope for the best."

Speaker of Parliament Halimah Yacob, who started the session, said that Mr Lee did not set out to be a politician - he was driven to assume office by conviction.

Quoting the man, she said: "We must make no mistake. In this chamber, we are playing for keeps, the future of Singapore is no joke."

Mr Lee took his parliamentary duties seriously, even in his old age and when ill, she said. She added that the founding father reminded the country that nobody believed that it could make it, but it has.

But, she added, Singapore will continue to make it only if there are "tough-minded people who know the difference between froth and substance".

Opposition leader Low Thia Khiang, secretary-general of the Workers' Party, paid tribute to Mr Lee but added that the interests of some Singaporeans were "sacrificed" in the nation-building process.

Speaking in Mandarin, he described Mr Lee as "an extraordinary political leader" who took Singapore from Third World to First. The former prime minister was able to build mutual trust with Singaporeans and take them in a common direction, he said.

But the People's Action Party's one-party rule was not the key to Singapore's transformation, said Mr Low.

Many Singaporeans were sacrificed in the process of development and "society has paid the price for it".

Mr Lee crafted policies based on the situation then, making rational choices in the interests of the country. Yet policymaking should not just be rational, but also humane and compassionate, said Mr Low. "Only in this way can policymaking avoid harming people and creating resentment."

But he gave Mr Lee credit for being reasonable and open-minded, and commended him for managing the interests of different groups in Singapore's early days, uniting and building a multicultural Singapore.

Mr Lee's policy on making Singapore a multiracial society was also hailed by many MPs.

Senior Minister of State for Home Affairs and Foreign Affairs Masagos Zulkifli, who spoke in Malay, said it was Mr Lee's most precious legacy, and that had helped Singapore's progress while protecting the minorities.

His firmness on no racial discrimination was especially important to minorities. For example, even though Indians form only 10 per cent of the population, Tamil remains one of the official languages, he said.

Christopher De Souza, MP of Holland-Bukit Timah GRC, who represented the Eurasian community, said that Mr Lee believed that no one race should pin down another, and that all races should work together to bring about a united future.

On the tremendous outpouring of love for Mr Lee in the past few days, Senior Minister of State for Education and Law Indranee Rajah said it was because the man cared for Singapore.

Said Ms Indranee, an MP at Mr Lee's Tanjong Pagar GRC: "The real secret of his enduring bond with Singaporeans is that we all fundamentally understood that the vision, the drive and the intellect were all powered by one thing - he cared."