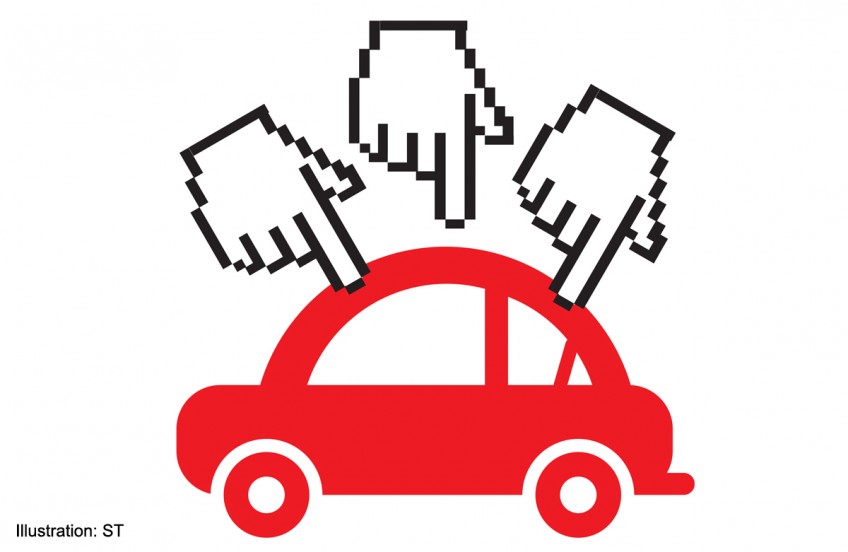 New carpooling websites have popped up after new laws were passed three weeks ago allowing motorists to collect money for giving rides.

Ryde and SwiftBack are the two newest kids on the block, joining other carpooling sites such as ShareTransport.sg, Tripda, Executive Car Pool Club, SinJorean CarPool Group and Carpool.

Between them, there are several thousand people who have signed up as either car owners offering to give others a ride, or commuters who want to hitch a ride from someone with a car.

He has partnered insurer Aviva to offer coverage to those who share rides, saying it is possibly the first such coverage in Asia.

Ryde also offers women-only pairings, as some women want to carpool only with other women, he said.

Mr Zou, who is Singaporean, said Ryde is managed by a team of five. "We want to be the next Airbnb and Uber of Asia, to be created out here from Singapore."

The new laws state that it is illegal for drivers to solicit passengers on the road, in public spaces or in carparks.

A vehicle is primarily for the motorist's own use and not for the purpose of offering paid rides.

Also, the destinations of passengers must be clarified before the journey and drivers cannot offer more than two rides a day.

Lastly, the laws allow drivers to accept monetary compensation or payment in kind for offering rides - though it should not be for profit.

"The amount or the value of any benefit in kind that the person collects from the passenger as payment does not exceed the cost and expenses incurred for the carriage of the passenger," reads the statute.

If there is more than one passenger in the car, the total payment must not exceed the expenses incurred for the trip - such as the cost of fuel or Electronic Road Pricing (ERP) charges.

Architecture student Hyu Lim, 22, is one who has jumped on the carpooling bandwagon.

He took a break from university to work on a few technology start-ups, including SwiftBack.

"With MRT breakdowns, higher ERP charges and higher petrol duties hogging the news of late, we thought ride sharing would be a good idea," he said.

"It allows people to defray the cost of driving and is also good for the environment."

The Singaporean, who taught himself computer coding, said he is "hoping to build something that would change social, economic and environmental innovation".

Technopreneur Moh Hon Meng, 46, was among the first in the carpooling scene here. He started ShareTransport.sg in 2012.

He said there has been "a big spike in new users" since news of the new regulations broke in the first week of this month.