Catholic body aims to raise awareness of poverty in Singapore 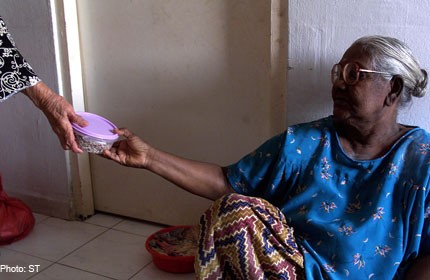 SINGAPORE - The Catholic Church's social service arm, Caritas Singapore, is starting a project to highlight that some people still struggle to support their families despite Singapore's affluence.

Called Singaporeans Against Poverty, the initiative will be launched this month, and will be helmed by Nominated Member of Parliament Laurence Lien, chairman of Caritas' advocacy committee.

"There are Singaporeans who are disconnected to what's happening in their fellow Singaporeans' lives," he said. "The project is about raising awareness that the poor exist in our midst."

Figures based on Singapore's key household income trends show that an estimated 105,000 households here have an average income of $1,500 a month.

Mr Lien said the Caritas project is not a charity or donation drive. "We want to set everyone thinking about the poor in Singapore," he said. "Who are they? Why are they in such a plight? How do they survive? We want to start a conversation." He added that Caritas wants to encourage people to think about "how we can journey with the poor and partner them, so that no one is left behind".

The project will involve a broad range of volunteers and people from various religions and is expected to extend for three to five years.

It will start with efforts to raise awareness about how the poor live, and explain the reasons behind their plight, Mr Lien said.

An online site, www.sgagainst poverty.org, has been set up to provide information on the state of poverty here.

The project will also use social media platforms such as Facebook and Twitter, advertisements and various activities to spread the message of "partnering the poor".

Later, the focus will shift to intervention - how to solve the root causes of poverty.

Mr George Lim, chairman of Caritas, said: "While the Government has its role to play to help the poor, this project is more about what we, as a community, can do, and how we can start by understanding the issues surrounding poverty and taking concrete steps to ensure that everyone can live decently and with dignity."