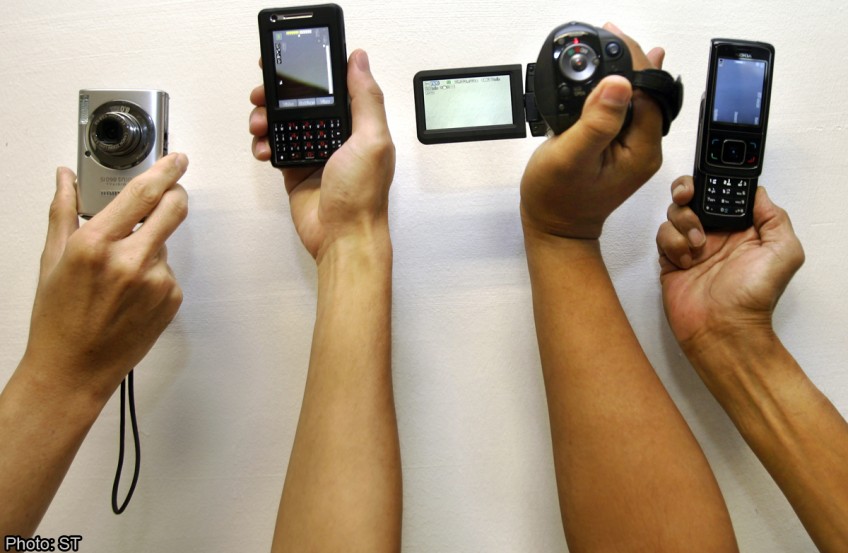 Video clips of women in various stages of undress in public changing rooms have appeared on a pornographic website.

It might not seem unusual, except that they're supposedly of women in changing rooms here.

The voyeuristic videos have been uploaded weekly to the site for the past three months.

They are believed to have been filmed in changing rooms and they show the unsuspecting females stripping down to their undergarments and trying on clothes.

The women can be identified as their faces are shown. Some of them are seen in uniforms, which have been identified on the site to be from schools here.

It is not known if the videos were taken from a hidden camera installed in the changing rooms or pushed under the cubicle openings.

The videos were uploaded by various accounts and have received an average of more than 10,000 views each.

The most recent video, which was uploaded on Monday, had more than 7,000 views in two days.

The New Paper went to a dozen clothing retail stores in Tampines and Bishan on Tuesday to find out if such incidents have been reported there.

Retail staff said they did not know of such incidents at their stores but they keep an eye out for suspicious activity.

Miss Erra Sariqsha, 19, a sales assistant at Cotton On in Junction 8, said the store has at least one employee manning the changing rooms at all times.

"Sometimes people like to loiter and wait for their friends, but we'll ask them to stand at the side (away from the rooms)," she said, adding that each room is checked after use.

"We'd be worried if something like that happens because we don't want chaos and for our store and business to get affected."

Miss Sutini Samat, 27, who works at Forever New, a women's fashion store in Tampines One, said men are asked to wait farther away from the changing rooms as well.

"We understand the customer's concerns. It's not nice and we are all women. When we change, we don't want to expose anything," she said.

"If there were such an incident, we'd definitely catch the culprit and hand (the person) over to security."

Others, when told of the videos, became flustered and visibly upset.

A retail worker at Tracyeinny, another women's fashion store in Junction 8, who wanted to only be known as Ms Marina, 39, said she was very angry knowing that such videos were being filmed.

"Somebody has to speak up, otherwise these perverts might think it's okay," she said.

"The women would get the brunt of it, becoming an 'Internet sensation' for the wrong reasons. It's an icky feeling.

"Don't these men feel ashamed? I mean, their mothers are women, too."

Mrs Helen Khoo, executive director of Wing Tai Retail which oversees popular brands such as Uniqlo and Topshop, said there have been no reports of such incidents at their retail outlets.

She added: "We take a serious view of such unlawful acts of infringement and our staff remain vigilant in safeguarding the personal privacy of the customers in our stores."

Shoppers TNP spoke to said they were disgusted by the existence of such videos.

Student Carrisa Yeo, 19, said: "The perverts should be punished for it as the lives of innocent girls are ruined."

Mr Jerome Kwok, 23, who is serving national service, said he felt the perpetrators need to be taken to task.

"What they're doing is sick," he said.

"I'm sure these people have a problem, and they need be locked away.

"I can't stop my girlfriend from using the changing room because there is no other way you can try on clothes. But I can warn her and when I go shopping with her, I can make sure there are no suspicious people lurking around the changing rooms."

Asked what he would do if he caught someone peeping at his girlfriend, he said: "I wouldn't beat him, but I would detain him and let the law deal with him.

"Such people will get what's coming for them."

Other women shoppers also said they would be more cautious.

"I'll let my friends know and keep the use of changing rooms to a minimum."

The figures include cases of up-skirt picture-taking, filming and flashing.

A police spokesman advises members of the public to be attentive to their surroundings and to call the police if there are hidden cameras suspected to be installed in changing rooms.

Lawyers TNP spoke to said there are various offences committed by insulting the modesty of a woman, filming it and uploading it online.

When contacted, a school which was mentioned in the title of one video said it would be investigating.

"Our school takes a very serious view of the issue as it is an invasion into the privacy of our students," said its spokesman.

"A full investigation into the matter will be conducted and we will counsel the student involved, as well as educate our school community on the possible measures of safeguarding themselves against such intrusions.

"Should the person responsible for filming and uploading the video prove to be a member of the school community, very stern disciplinary action will be taken against him/her."

"Female changing rooms are supposed to be safe, where customers can change without any fear," she said.

"I hope these perverts get their karma and hopefully it'll be swift."

REPORT TO THE POLICE

"Under the Penal Code, it is insulting the modesty of a woman," he said.

"The person who took the video can also be charged for filming and uploading an obscene film under the Films Act, which carries a fine of $2,000 for each film, up to $80,000, or imprisonment up to two years, or both."

Lawyer Edmond Pereira said that while cases of women being filmed in changing rooms here are not common, victims should make a police report.

He added: "They should make a police report unless the person was already caught in the act, in which case the police would have acted on it immediately."

A 36-year-old computer programmer was jailed for eight weeks earlier this month for secretly filming women in fitting rooms and on shopping mall escalators.

He was caught when a man in a cubicle next to his at the Factorie store at ION Orchard spotted a video camera lens protruding from a bag.

Investigations showed that he was inside one of the fitting rooms when he used a video camera to film a woman trying on clothes.

COTTON ON AT PARKWAY PARADE

An NUS undergraduate who filmed upskirt videos of unsuspecting women in 2010 was jailed for six weeks in 2012.

He pleaded guilty to intending to insult the modesty of three victims.

On separate occasions, he had taken upskirt photos in the changing rooms of a Cotton On outlet and filmed the undergarments of a woman on an escalator at a mall.

HOW TO CHECK FOR SPYCAMS

Spycams are becoming harder to spot.

This is because some of their lenses can be as small as five-cent coins, while others can be concealed as a shirt button, disguised as a car key or even hidden in smoke detectors.

Some spycams come in pinhole variations, which can be hidden in shoes, pens and even hangers.

But private investigators and security companies The New Paper spoke to said that while spycams can be hidden, they are not impossible to detect.

Mr Marcus Tan, 49, the managing director of Eureka Plus, which sells hidden cameras, said: "The cameras are not invisible. Some still need power, so all you have to do is look for a link to the power source.

"Those that run on batteries can also be detected. There are telltale signs, such as flickering lights, sounds and interference."

Mr David Ng, 38, a private investigator with DP Quest, said: "The lenses of spy cameras are the same size as the tip of a pin and that's all that needs to be exposed.

"But the cameras themselves are not that small, and need to be concealed within larger items, such as hangers and pens."

He added that the cameras can be found by rummaging the place and using detectors, but the chances of finding them are low.

"Detectors may not always work, but they can detect some hidden cameras," he said.

Devices such as infrared detectors, which are sometimes costly, can be used to detect hidden cameras by using reflections off the lenses.

The alternative would be hidden camera detector apps which can be downloaded onto phones, but the reviews of such apps have been poor, with many giving them a one-star rating out of five.

Mr Ng advised shoppers to do a quick sweep of the changing room for suspicious items before using it, but admitted it may not always work.

"Instead of finding the actual camera, it's easier to just cover up or remove suspicious objects," he said.