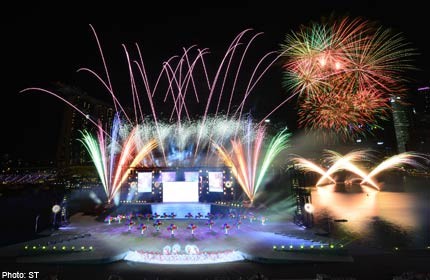 Singapore celebrated its 48th birthday with the annual National Day Parade as well as celebrations in various parts of Singapore.

This year's show had nine segments, each meant to highlight Singapore's uniqueness and diversity.

Close to 6,000 performers were involved in the parade, which was watched by 26,000 spectators at the Marina Bay Floating Platform.

For the first time in years, cloud cover made it unsafe for the Red Lions to make their jump. This meant that Third Warrant Officer Shirley Ng did not manage to make history as the first woman to jump with the Red Lions at the National Day Parade this year.

Still, the performers on the ground put up a spectacular show, and spectators even seemed to enjoy the widely-panned National Day Song, 'One Singapore', saying that it is quite catchy.

Here are the highlights from this year's National Day Parade:

Scenes of celebration from around Singapore:

Here are some of the must-watch scenes of the NDP, taken from the Preview show:

Although low clouds scuppered the Red Lions' jump at the actual parade, take a look at Third Warrant Officer Shirley Ng and the Red Lions during their rehearsals, as well as in previous years:

"To succeed under changed circumstances, we must adapt our basic approach to nation building. We must strike a new balance between the roles of the individual, the community and the State.

"We must strengthen our sense of community. We need to give greater mutual support to one another - helping the less fortunate in big ways and small; volunteering for causes that we care about; organising ourselves to work for the common good..." (read full message here)

Congratulations Singapore! Greetings from other nations

Controversy over the National Day Song:

Reading the score of the National Day song

In defence of the new NDP song

NDP 2013: "Many Stories... One Singapore" theme for this year's parade

NDP 2013 to showcase stories of Singaporeans

20 cakes created with a local twist for National Day

Celebrate National Day with these red and white gadgets