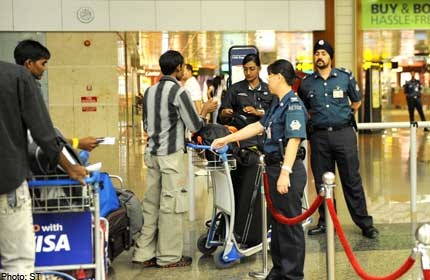 SINGAPORE - Monthly salaries for Certis Cisco security officers at Changi and Seletar airports have been increased by about $270 amid a labour crunch.

And it is not just the security firm which is paying for the increase. The 15 per cent hike is being partly funded by Changi Airport Group.

It is the first time a client has agreed to do this, Certis Cisco told The Straits Times. The airport agreed to co-fund the salary increase when it recently extended the firm's contract for another five years until March 2018.

President and chief executive officer of the security firm Paul Chong said that with the airport's "strong support", more than 2,300 airport officers "now benefit from a better pay packet".

It is an affirmation of a close partnership - Cisco has been handling passenger and baggage security checks at Changi since 2008 - that will ensure the delivery of higher service standards, he said.

Changi Airport Group's executive vice-president (airport management), Mr Tan Lye Teck, noted that security is a "core job function" at an airport. It is a win-win situation for Changi to work with the security firm to raise wages to attract and retain good staff.

Apart from increasing pay, the airport is working with Cisco on productivity-boosting initiatives. For example, officers are now trained to do more than one task to better utilise manpower.

Ground-handling firm Sats and Aetos also provide auxiliary police services at the airport. But they are engaged separately by the airlines and other industry players.

The labour crunch has hit all three firms. A Cisco spokesman said: "The key challenge is to overcome the negative public perception of security jobs that they are tough, have long working hours with no career progression."

In July, it gave a pay rise of up to 15 per cent to security officers who work outside the airport. This will cost it $18.1 million a year. To attract staff, some security firms pay newcomers a "joining bonus", typically around $5,000.

More pay is not a solution, said Mr T. Morgan, president of the Security Association, Singapore. "There are many reasons why we are unable to attract people, one of which is the 12-hour shift."

To remain "motivated and vigilant" is a challenge, especially for those who work outdoors, he said.

"We should move towards 70 per cent automation and 30 per cent manpower. Today, it is the other way," he added. "But first, mindsets must change. Buyers need to be convinced that there is no security compromise."