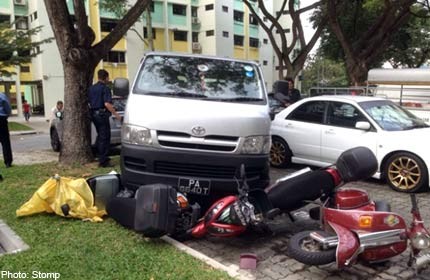 SINGAPORE - It was a dramatic morning for 70-year-old Abdul Rahmin Samad.

"My wife and I heard a crash coming from the carpark downstairs," he said.

"I was hoping it was not my car." Unfortunately, it was.

At 7.15am on Friday, a van mounted a kerb and crashed into three cars, including Mr Rahmin's, and toppled three motorcycles at Block 44, Chai Chee Street.

The crash caused a commotion and brought concerned residents down to the carpark.

Mr Rahmin's car was towed away soon after the accident but his insurance company provided him with a replacement.

Senior engineer Abdullah Mansor, 34, who owns one of the damaged motorcycles, was not there when the accident happened but his father called him immediately afterwards.

He said that when he got there, he saw the van driver, who is his neighbour, standing outside his van, looking shocked.

He estimates the damage to his motorcycle, which had been towed away for repairs, to be about $500. He shares the motorcycle with his father, who has had it for more than 20 years.