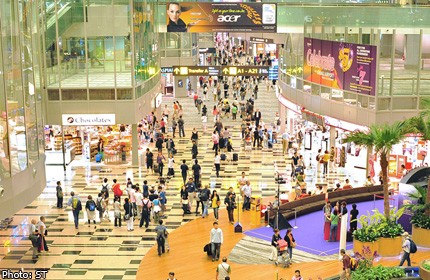 SINGAPORE - Changi is digging deeper into its wallet to grow transit traffic by offering rewards to more travellers who choose Singapore as a stopover.

The airport said it is in talks with several foreign carriers to expand an incentive scheme currently offered only to Singapore Airlines and SilkAir transit passengers.

Changi declined to name the airlines.

The existing tie-up with the SIA group thanks travellers who choose to break their journeys here by giving them a voucher worth up to $40 for shopping and dining.

Australia, Europe, India and China are among its key target markets.

Changi Airport Group spokesman Ivan Tan said the response "has far exceeded our expectations", but he would not say how much has been spent.

The promotion is funded jointly by the airport and airlines.

Industry analysts say that unlike point-to-point traffic which is mainly destination-driven, it is in the transit market that airports compete aggressively.

Transit traffic currently accounts for three out of every 10 passengers at Changi, Mr Tan said.

The figure has stayed fairly stable in recent years despite tough contest from rival airports, he said. Changi competes mainly with airports in the Asia-Pacific region and the Middle East.

Incheon's programme was launched in 2011 and recently extended to travellers in South-east Asia, including those from Singapore, Indonesia, Malaysia and Thailand.

She said: "In the old days, an airport would be happy to have one dominant carrier and be willing to accord it a more favourable position vis-a-vis other carriers, perhaps even discouraging competition so as not to dilute the market for the dominant carrier."

This has become "a dangerous strategy" and airports must be mindful not to "put all their eggs in one basket", she warned.

Changi will continue to focus on its extensive connections: More than 250 cities are served by about 100 airlines that operate over 6,600 scheduled flights a week, said Mr Tan.

"This gives our passengers immense choice," he added.

Those with longer layover times can also enjoy free local tours, he said.