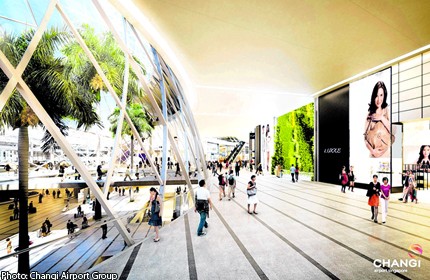 SINGAPORE - Singapore is embarking on the largest expansion of its iconic Changi Airport and the plans include two new terminals and a complex codenamed Jewel that will adorn the east with its shops, restaurants and indoor garden.

Terminal 4 will be ready by 2017. When Terminal 5 is completed in about a decade, it will double the airport's existing capacity of 66 million passengers a year.

"And we have one more trick, outside T1," Mr Lee said. "We will build something special."

Where an open-air carpark now sits in front of the airport's first and oldest terminal, a multi-storey complex codenamed Jewel will be built.

"So we have Gardens by the Bay, this one is Gardens at the Airport!" Mr Lee said.

He also announced plans to move Paya Lebar Airbase to Changi East after 2030. That will free 800ha of land, bigger than the size of Ang Mo Kio, for new homes, offices and factories.

The moving of the military facility, which is the largest of four airbases run by the Republic of Singapore Air Force, will also remove height restrictions on large areas around Paya Lebar.

This "frees us to develop new, exciting plans for the big chunk of eastern Singapore...

"You are talking about 2030 and beyond and it won't fully happen for maybe 20, 30 years after that... But the potential is there. We can dream."

A fourth runway will also be built at Changi East - the location for the airport's future Terminal 5. Changi is expanding to meet growing traffic but so are other airports, Mr Lee stressed.

Kuala Lumpur International Airport and Bangkok's Suvarnabhumi are gearing up to serve 100 million passengers each a year.

Both are geographically better placed than Singapore to be the region's air hub, he said.

"But we are the hub. Why? Because they are not Changi Airport! That makes a difference," he said to rousing applause.

These are very ambitious and long-term infrastructure projects, Mr Lee said, but they are not merely plans.

"These are acts of faith - in Singapore and in ourselves," he added.

They reflect "our fundamental mindset and spirit - to be confident, to look ahead, to aim high".

"We are creating possibilities for the future. We are opening up opportunities for our children, for their children to continue to build, to upgrade, to reinvent this city for many more years to come."

There are few countries that can think or plan over such a long term but Singapore has been able to do so, he observed.

Changi Airport was the result of such long-term thinking. It exists because in the 1970s, then Prime Minister Lee Kuan Yew had the vision and pushed for it, against external experts' advice.

Today, Changi Airport is an icon to travellers, and for Singaporeans, it is a welcome landmark when they return home.

"But Changi Airport is more than an emotional symbol... It is why we thrive as an international hub for business, for trade, for tourism." Container port operations will also move to Tuas, freeing up prime land in Tanjong Pagar.

"If we can carry off these plans, we don't have to worry about running out of space or possibilities for Singapore.

"We are not at the limits. The sky is the limit," he said.