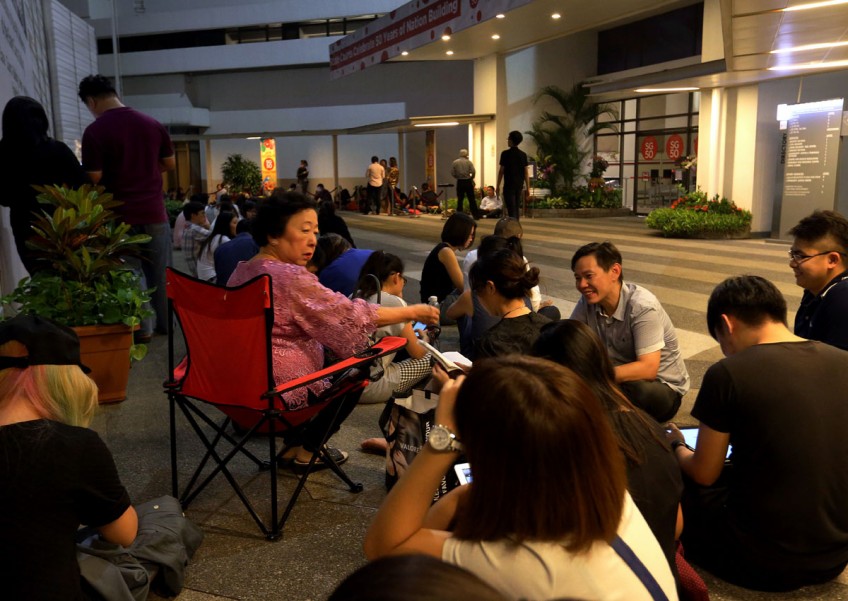 On Tuesday night, the eve of the verdict, City Harvest Church held a 12-hour fasting session and a prayer meeting for Kong Hee and others accused of misappropriating and misusing church funds.

One person who attended the event at the church's Jurong West building told The Straits Times that more than 2,300 "prayed for victory".

But as news that all six accused had been found guilty reached the 60 or so supporters who had gathered outside Court 1 yesterday, the mood turned grim - with plenty of frowns and upset faces.

Many seemed to be using messaging apps to communicate with people inside the courtroom. Supporters had started queueing outside the State Courts as early as 10pm on Tuesday night for one of 55 passes available to attend the hearing.

Those who came together with family or friends started talking to each other in hushed tones.

While most declined to speak to the media, those who did expressed their support for the church and its convicted leaders.

A 22-year-old, who declined to be named, told The Straits Times before the verdict that the church will remain strong regardless of the outcome. "I'm very sure I can trust in my church and its integrity. The pastors are genuine people and they are sincere," she said. "I believe that the church is doing things properly."

Business owner John Tay, 25, also said after the guilty verdicts that his belief in the church remains unaffected. "I'm still feeling calm, and my support for the church and its leaders will never waver."

At about 11.20am yesterday, an hour after court was adjourned, the church released a statement by its co-founder and executive director Ho Yeow Sun, thanking members.

"The judge has rendered his decision and, naturally, we are disappointed by the outcome. Nonetheless, I know that Pastor Kong and the rest are studying the judgment intently and will take legal advice from their respective lawyers in the days to come," wrote Ms Ho, whose pop career was a centrepiece of the case. The misappropriated money was used to fund her music projects, including an attempt to break into the United States market.

"Thank you for your unwavering faithfulness in loving God and loving one another. More than ever before, let's have a unity that is unbreakable. Pastor Kong and I are humbled by the tremendous outpouring of love and support shown to us during this time," she went on.

Several people who abandoned City Harvest said the guilty verdicts vindicated their decision to leave the church. One, who declined to be named, said that she quit in 2013 because she felt "let down" by its leaders.

"I believed that the six were guilty, and now that the verdict is out, I am relieved knowing that I did not make the wrong judgment in leaving," added the undergraduate.

When The Straits Times visited City Harvest's Jurong West church yesterday, the building was "closed for maintenance" according to the staff there. It is slated to reopen during the weekend.