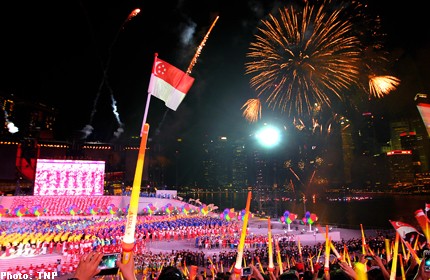 SINGAPORE - There were no complex, larger-than-life costumes to rival the giant steam buns and satay mascots of 2011.

Neither were there dazzling props like last year's pyrotechnic torches that lit up the night with showers of sparks.

But what Friday's National Day Parade (NDP) lacked in technical razzle-dazzle, it more than made up for with humour and a belief that it is the participants themselves who ultimately make a parade sparkle.

It was not so much a parade as an off-the-wall party, complete with pop quizzes and "kacang puteh" men hurling snacks at the audience.

The life-size Merlion even broke into a rap. Voiced by veteran actor Lim Kay Siu, the iconic creature said it was so proud to be a Singapore icon that it was worth even being struck by lightning - a self- deprecating nod to a 2009 incident when lightning broke a piece of the creature's mane and base.

These laugh-out-loud moments were reminiscent of that year's parade, which was filled with mocking references to "buayas" and Nonyas.

Ultimately, it was these touches that made Friday's NDP show stand out from the eight that I have covered so far.

It was authentically - and quite proudly - Singaporean.

Singlish and "kiasu-ism", among other famously Singaporean habits, were feted in verse and music. Songs that celebrated the heartland - a woman's wish to make a "Jurong Baby" and another about finding love in Queenstown - also hit all the right notes.

Another notable departure from tradition was Ms Tan's decision to ditch the familiar narrative of Singapore's transformation from fishing village to bustling metropolis in favour of simple stories about ordinary Singaporeans.

It was almost as if the creative director had felt it was much better to feel the strength of the nation, rather than being told about it with yet another grand musical depicting our survival against the odds.

Last night's party atmosphere allowed everyone - performers and spectators alike - to let their hair down to cheer, sing and dance along with abandon.

Even the theme song, One Singapore, much ridiculed by netizens in the past month, sounded amazing live, sung by a 68-strong choir formed by young aspiring singers and mak ciks (Malay for aunties).

This year's NDP may have been noticeably simpler in scale but it showed one important thing.

That you can spend a lot on beautiful stage props and technological hardware, but it is the humour and authenticity of the experience that can truly make a difference.