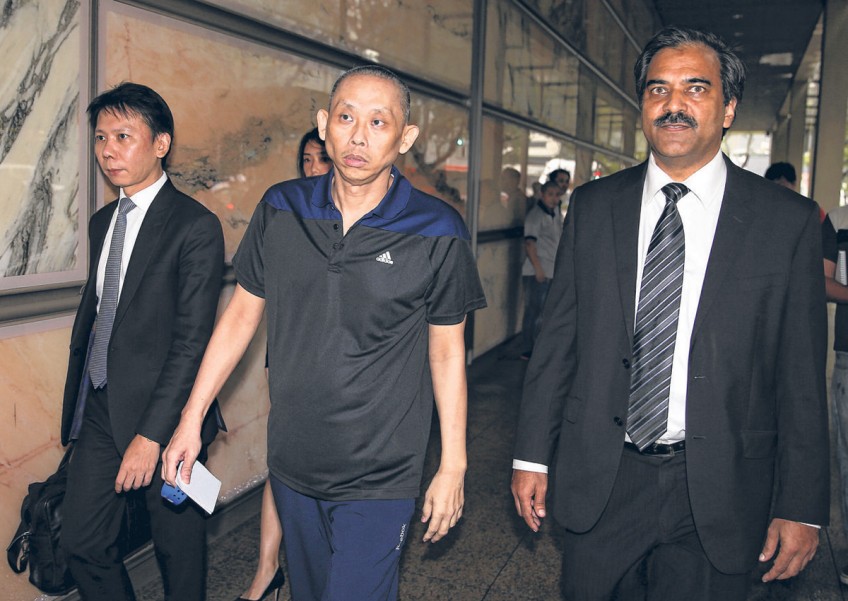 Alleged match-fixing mastermind Dan Tan pictured with his lawyers Thong Chee Kun and Hamidul Haq after being freed yesterday by the Court of Appeal.
The Straits Times

He was behind bars for two years without ever knowing when he would be released.

But yesterday, alleged kelong king Tan Seet Eng, better known as Dan Tan, walked out of the Supreme Court a free man following an appeal against his detention.

The Singaporean businessman, whom the Interpol referred to as "the leader of the world's most notorious match-fixing syndicate", was arrested on Sept 16, 2013.

He was then detained under the Criminal Law (Temporary Provisions) Act (CLTPA) the following month. The law allows the Minister of Home Affairs to order the detention of suspected criminals without trial. The orders are up to a year and reviewed annually.

Delivering the judgment in the three-judge Court of Appeal yesterday, Chief Justice (CJ) Sundaresh Menon said Mr Tan's detention was unlawful and he should be freed.

He also stressed that the most important purpose of the CLTPA was the maintenance of "public safety, peace and good order" within Singapore.

He added that the grounds given for Mr Tan's detention set out few connections with Singapore.

The reasons given for his detention was that he had allegedly fixed football matches in countries such as Egypt, South Africa and Nigeria.

CJ Menon said: "These are based on (Mr Tan's) running of the syndicate from Singapore and his recruitment of runners in Singapore. "While, as we have noted, these acts are reprehensible and should not be condoned, there is nothing to suggest whether (or how) these activities could be thought to have a bearing on the public safety, peace and good order within Singapore."

Mr Tan is the alleged leader of a Singapore-based match-fixing syndicate.

In December 2011, he was named for allegedly masterminding fixed matches in Italy's Serie A and Serie B.

He was also charged in absentia by a Hungarian court in May 2013 for his alleged role in fixing matches there.

Dressed in purple prison overalls as he sat in the dock yesterday morning, a gaunt Mr Tan appeared calm when he heard the judges' decision.

He changed into a polo shirt and blue trousers after he was freed.

Accompanied by his lawyers, he walked out of the Supreme Court building at around 4.20pm. He declined to comment when approached by reporters.

The lawyer added: "My client is relieved and grateful to the court for coming to this fair conclusion."

Responding to media queries, the Ministry of Home Affairs said it will carefully consider what needs to be done in the current situation. It added that it will study the judgment and assess further steps.

The New Paper also asked the Attorney-General's Chambers (AGC) on whether it will be taking further action against Mr Tan.

Its spokesman said: "AGC will study carefully the Court of Appeal's written grounds of decision before determining any course of action."

This article was first published on Nov 26, 2015.
Get The New Paper for more stories.