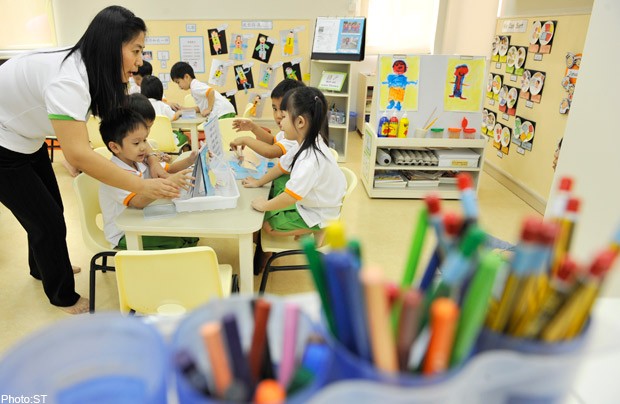 The three-year-old boy who was filmed being allegedly abused by his NTUC My First Skool teacher is ready to return to school. But his parents are upset after operator NTUC First Campus requested that they first take the boy to the KK Women's and Children's Hospital to see if he is ready to return.

"They told me that my son has been known to be aggressive and has pushed his friends, and hence he needs to go for this assessment to gauge if he can mingle with others," said the mother of the boy. "Why are they penalising my son when it is the teacher who should be sent for any assessment?"

The boy suffered a fractured shin after an incident at the centre's Toa Payoh branch in July. The closed-circuit television footage - showing a teacher dragging the boy across the floor and pushing him to the ground - went viral. The 51-year-old suspect, who was sacked, has been arrested and police investigations are ongoing.

The mother, who is not named to protect the identity of the child, met representatives of NTUC First Campus on Wednesday to discuss enrolling him at another childcare centre in its chain. When contacted, a spokesman for NTUC First Campus said it is the operator's policy not to release information on children under its care. However, he emphasised that these steps are necessary to ensure the well-being and development of the child and the parents should share the responsibility.

He said the school has paid for all medical expenses related to the injury, plus the bill for a private child-minder over the last two months. "Our aim is to have a sustainable relationship that does not compromise the safety and well-being of the child, the other children in the centre, and that of our teachers and staff in the centre," added the spokesman.