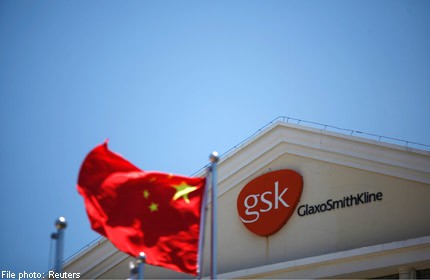 A Chinese national flag flutters in front of a GlaxoSmithKline (GSK) office building in Shanghai.

SHANGHAI - China has shut down a travel agency which served as a conduit for bribes allegedly given by staff of British drug firm GlaxoSmithKline (GSK), the government and state media said.

The Shanghai Linjiang International Travel Agency was ordered to halt business over "illegal activities" including fake billing, the Shanghai tourism administration said in a statement.

Media reports say more than 20 people have been detained in the case, including pharmaceutical and travel industry personnel.

Police have held four top executives of GSK China and prevented another, the firm's British finance director, from leaving the country though he has not been formally detained.

"Company (GSK) regulations only allowed gifts of a hundred or two hundred yuan which definitely wouldn't do," he said in an interview aired this week.

GSK executives also took kickbacks from travel agencies in return for organising conferences, some of which did not exist, police say.

In a statement earlier this week GSK said it was "deeply concerned" about allegations of fraud by individuals at the company and third-party agencies and would cooperate with the investigation.