PM Lee speaks at the US Capitol in Washington on Wednesday (March 30).

Russia's war in Ukraine presents China with "awkward questions", as Moscow's actions contravene the very principles that Beijing relies on to back up its position on Taiwan, Prime Minister Lee Hsien Loong said on Wednesday (March 30).

Speaking at a dialogue session organised by the New York-based Council on Foreign Relations, Lee said the conflict could potentially have far-reaching implications across Asia.

For China, the war "presents them with awkward questions because…it violates the principles which the Chinese hold very dear — territorial integrity, sovereignty and non-interference", he said during the hour-long event.

"And if you can do that to Ukraine, and if the Donbas [region] can be considered to be enclaves, and maybe republics, then what about Taiwan or other parts of non-Han China? So that's a very difficult question."

Nonetheless, Lee emphasised that he did not believe the fact that "China refuses to distance itself from Russia" would come at a cost to the Asian superpower within the region.

"All the countries in the region…worry about sovereignty and the principles of the United Nations charter, but at the same time they want their ties with China and quite a few of them have significant ties with Russia," the prime minister said.

Later, when asked by an attendee whether China could play a role as an independent mediator in the conflict given its strong ties with Moscow, Lee said he did not believe Beijing would "volunteer for this task".

"I think they would much rather somebody else stand up" for the role, he said. "And I don't think the lack of a mediator is the problem."

Asked by the dialogue's moderator, former senior US diplomat Richard Haass, if there were takeaways for Taiwan from US's reaction to the Ukraine invasion, Lee pointed out that there were key differences in the two scenarios.

The existence of the North Atlantic Treaty Organisation (Nato) meant that parties knew where the "red lines" were, he noted.

"In Asia, you don't have Nato, but you have hotspots," Lee said, noting that the status quo on Taiwan was held together by the Three Communiques between the US and China - which Beijing views as the basis of US-China ties — as well as a policy of strategic ambiguity.

China views self-ruled Taiwan as a renegade province awaiting reunification with the mainland, by force if necessary.

Any change in the status quo for Taiwan "must not take place forcibly or non-peacefully", he said. "That's very difficult to manage because it's not just an economic issue, it's not just a strategic issue, but also to do with the politics and the sentiments of the population."

The Singapore leader, who is on a week-long working trip to the US, touched on a range of issues during the one-hour dialogue, including Hong Kong's future, North Korea's nuclear weapons programme and the situation in post-coup Myanmar .

The US visit by Lee, 70, is his first since 2019 and was scheduled within days of a now-postponed summit between US President Joe Biden and leaders of the Association of Southeast Asian Nations (Asean). Officials have said the multilateral summit had to be delayed because of scheduling conflicts. 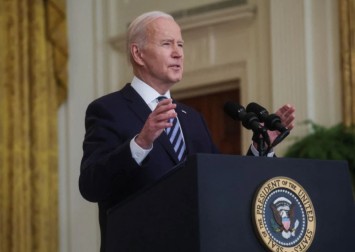 At a joint press conference on Tuesday, Biden lauded Washington's strong ties with Singapore, which hosts a logistics facility for the US navy and serves as a hub for the rotational deployment of other American military assets in Asia.

China featured heavily in questions posed to Lee during Wednesday's dialogue session. Asked whether his island republic stood to gain from greater separation from Chinese markets, Lee stressed the importance of China as a trading partner.

Hong Kong, he went on, was facing a "different, specific problem" that he said would take "some time to be resolved".

He acknowledged that some businesses and people in Hong Kong were thinking of moving elsewhere in the region, including to Singapore.

"If they do, we'll be happy to take them," he said, but reiterated that "it is not to our advantage to have Hong Kong languish".

"[It is] far better for us to have a robust competitor. They thrive, we thrive. We will make a living and so will they," he said.

Asked for a realistic assessment of denuclearisation on the Korean peninsula, Lee said no politician would go on the record to acknowledge that Pyongyang was entitled to nuclear weapons.

Nonetheless, "what is conceivable to happen is that there is deterrence and there is a situation where the status quo does exist but countries continue to not recognise it", he said. "Because if you do recognise it, then there are many consequences."

Lee was also asked about post-coup violence in Myanmar — a topic that was mentioned by Biden during their Tuesday joint press conference. 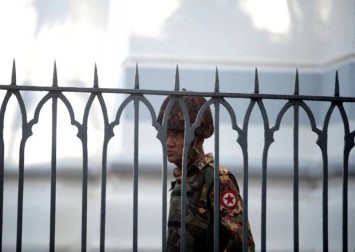 Singapore, along with Malaysia and Indonesia, has been among the regional countries that have strongly condemned the actions of the Myanmar military since the coup in the country last February.

Myanmar activists have however insisted that Lee's government needs to do more given the island state's sizeable business footprint in their country. Singapore has also been in activists' cross hairs because of its status as a financial hub that has long been utilised by the Myanmar military and its proxies.

Singapore officials have said that imposing broad sanctions against Myanmar would hurt its population and that its regulators have told banks to monitor suspicious transactions.

Lee spoke on similar lines on Wednesday: "With Myanmar, none of us have got enormous influence on what happens within the country."

There were not many "aggressive options" available, Lee said, but Singapore would "continue to speak and to encourage". Lee noted Myanmar's previous exit from junta rule and transition to civilian government even though it took "a long time".

"It may be necessary for us to walk that path again and I hope the second time will not be harder," he said.