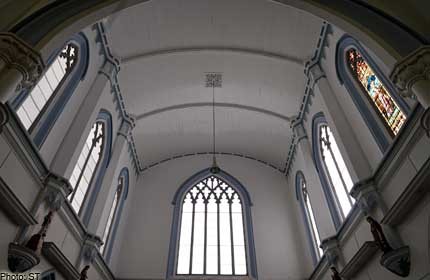 SINGAPORE - The church restoration project at the centre of a high-profile dispute could have its $532,050 public grant suspended if there are further delays, the authorities said on Wednesday.

Work to restore the 72 stained glass windows at St Joseph's Church stalled last October following a spat between its rector and the Catholic leadership in Singapore.

Last week, Reverend Michael Teo, 76, was removed for disobeying an order by the previous archbishop not to get involved in the project and for lodging a police report about alleged wrongdoing related to the scheme.

On Wednesday, it emerged that no public money has yet been used for the church restoration scheme, which was due to be finished by next year.

But a spokesman for the National Heritage Board (NHB) said that further delays "may result in the grant being suspended".

She said the public body is aware of the hold-up and is working to make sure the project proceeds as planned.

St Joseph's Church in Victoria Street is a 162-year-old national monument, which is why it was awarded the funds.

The cost of the $1.2 million project is being covered by the grant, as well as donations from Catholics and others.

Last Saturday, Father Teo told his congregation that he had complained to the police about possible wrongdoing because his "pleas" to the church authorities "fell on deaf ears".

He said he was suspicious about the stated cost of the project.

Father Teo has also asked the Commissioner of Charities to investigate, and its office said on Wednesday that it would be looking into his feedback.

Father Teo was dismissed when Archbishop William Goh, the head of the Catholic Church in Singapore, ordered him to be removed from his post and replaced by Reverend John Bosco Xavier.

Catholic priests take a vow of obedience requiring them to abide by the decisions of their superiors in the Church's hierarchy.

More than 400 people have signed a petition calling for Father Teo to be reinstated and his supporters are bent on taking their appeal to Rome if all else fails.

Work on the project began in July last year when the row of windows on one side of the building was removed for repair by the contractor, Artglass. But it ground to a halt in October when Father Teo refused to allow one window bearing the figure of St Catherine to be dismantled, an archdiocese spokesman told The Straits Times.

A spokesman for Father Teo said he was right to insist that the window stay, because of an agreement to remove and repair others first as part of "phase one" of the work.

"This was not done," said Mr Simon Ho.

Also, the St Catherine window contained a figure, unlike the other windows of the first phase which contained decoration art.

The ones with figures were meant to be part of the final phase.

"The project is in good hands. I have been in this business for over 30 years," she said.

"We will sit down with the new rector when he takes over and sort out the completion date."

Ms Koh added that 21 out of 72 windows had been taken down.

"They are fully repaired, restored and stored in the Artglass studio at Mandai."