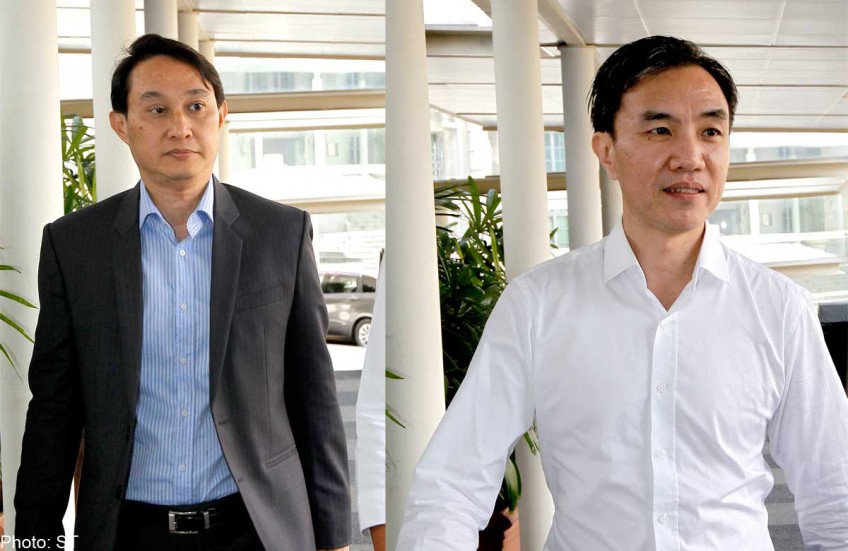 John Lam (right) crossed swords with Chew Eng Han in court as the latter tried to discredit his earlier assertion that it was Chew’s idea to cook up the alleged sham deals that landed the six accused in court.

The City Harvest Church trial resumed yesterday with one of the accused distancing himself from the others.

Former church board member John Lam Leng Hung, the first of the six defendants to take the stand, said the plans to invest church money in bonds had not come from him.

The prosecution believes $24 million was invested in sham bonds, with the money used to bankroll the secular music career of Ms Ho Yeow Sun - the wife of church founder Kong Hee. Another $26.6 million was allegedly used to cover this up.

Lam said it was fellow accused, Chew Eng Han, the church's former investment manager, who had requested a meeting with him in 2007 and then detailed the proposal to invest in the bonds.

The defence has consistently said Ms Ho's pop music career was part of a church-approved Crossover project to evangelise.

"(Chew) said to me he intended to resign from his job and was going to set up a new fund management company," Lam said. "He proposed that he be the fund manager to invest the church's surplus funds."

According to Lam, Chew suggested that music production firm Xtron Productions - then Ms Ho's manager - issue a bond which the church could invest in.

The money would then be used to finance the Crossover project, which included Ms Ho's new album.

"He said the bond could be repaid from (her) album sales," said Lam.

Questioned by his lawyer, Mr Kenneth Tan, Lam said he believed the Xtron bonds were a sound investment because Ms Ho had been "very successful" in her previous albums and he trusted Chew to have done due diligence.

Chew had also assured him that, if the new album failed, Xtron director and Indonesian businessman Wahju Hanafi - a long-time church member - would personally repay the church.

"I knew Wahju was a high-net-worth individual... and his wife also comes from a rich family, so I took comfort from those facts," Lam said.

While the prosecution had previously shown e-mail exchanges between some of the accused suggesting that Xtron had cash-flow problems, Lam said he had not seen e-mails and documents related to the firm's cash flows until the trial started.

Earlier in the day, his lawyer also sought to paint him as a "volunteer" who only helped out with the others' queries on an ad hoc basis. Mr Tan said: "He doesn't run the Crossover and he's not involved in Xtron. He seems to pop up here and there, but that's because he's an accountant, so whenever there is an issue he is asked."

Lam also said yesterday that City Harvest board members had backed Ms Ho's music as a way to evangelise as far back as 2002. The board members had also agreed the church's support should be discreet so young "unchurched" people - a key target of the church's outreach - would not dismiss her music as "yet another church-sponsored project".

Ms Ho, who had appeared on the first day of the trial's previous tranches, was not seen yesterday. She is expected to be called as a witness.