The organiser behind a publicity stunt involving vending machines that dispensed a $50 note in exchange for $3 has been revealed to be local telecommunications service provider Circles.Life.

The two vending machines, located outside H&M in Somerset and near Chevron House in Raffles Place, drew large crowds during the two-day event on Feb 27 and Feb 28.

People who inserted $3 into the vending machines received a $50 note, which means that they gained $47 with no strings attached. 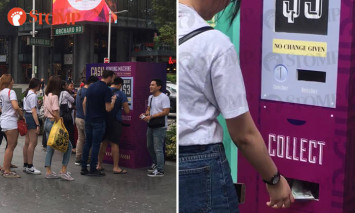 However, the event held at Raffles Place yesterday had to be cut short after police turned up as the organiser did not have a permit, while the second Orchard Road event was cancelled as all cash prizes had been "fully redeemed".

On Thursday (March 1), Circles.Life revealed via its social media platforms that it was the organiser of the #3DollarBaller campaign.

An announcement was also made on #3DollarBaller's official Instagram page.

Some of you may have guessed it. We're really behind #3DollarBaller. Here's what you can get with $3. Find out more about $3 Unlimited Data on Demand on www.circles.life.

The marketing stunt was to promote Circles.Life's 'Unlimited Data on Demand' service which is available for $3 per day on top of a subscriber's base plan.

This add-on service is one of several new services announced by the telco today.