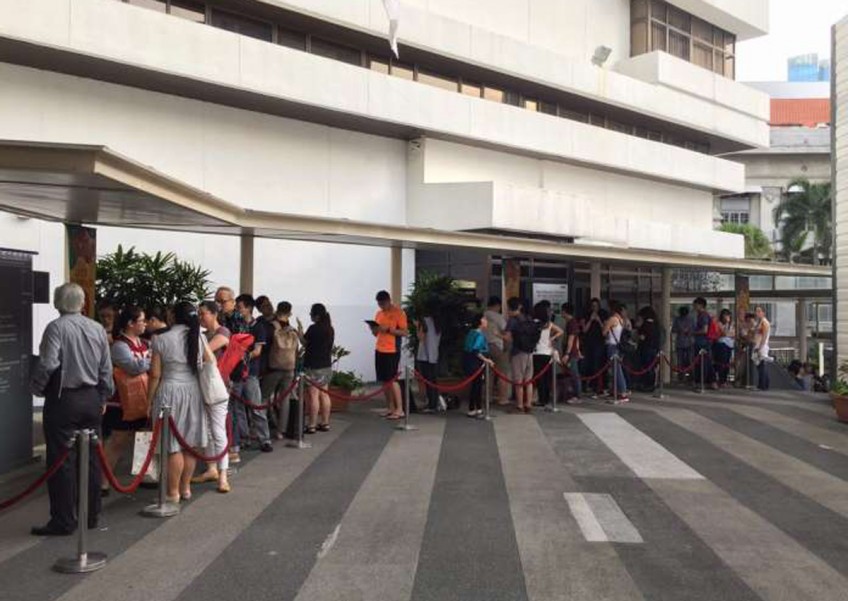 Over 60 people were in the queue at 7am.
The Straits Times

UPDATE (3.22PM): Chew Eng Han has been sentenced to six years while Serina Wee will be jailed five years.

SINGAPORE - The six City Harvest Church (CHC) leaders who were found guilty on Oct 21 are back in court today (Nov 20) for both prosecution and defence to make oral submissions to the judge on the appropriate sentences, Channel NewsAsia reported.

According to The Straits Times, the six are most likely to be sentenced today.

Channel NewsAsia reported that the prosecution is seeking a sentence of 11 to 12 years' jail for Kong Hee, eight to nine years' for John Lam, about 11 to 12 years for both Tan Ye Peng, Chew Eng Han and Serina Wee; and about five to six years for Sharon Tan.

All six were found guilty on Oct 21 of all charges ranging from criminal breach of trust and falsifying accounts.

Regardless of the sentencing, many supporters turned up outside the State Courts unfazed. The Straits Times reported that a line of about 50 people had formed outside the courts as of 6am this morning. The majority of whom attend CHC.

According to Channel NewsAsia, interested members of the public had started to queue at about 10.30pm on Thursday night (Nov 19). However at 7.15am on Friday, only 50 passes were given out for the morning session and another 50 for the afternoon session today. Friday is also the earliest date for sentencing.

Production supervisor Sam Lew, a CHC member for the past 15 years, told The Straits Times that he was not feeling nervous or worried about the sentencing as he had already prayed about it.

Said Mr Lew, 37: "Of course we are disappointed by the verdict but we do respect the decision of the State Courts. But (I have never wavered) in my trust in the church leaders because I believe in what God is doing in our church."

There were also some curious onlookers who were not from the church. One of them told Channel NewsAsia: "I had dreams that during the case, during the early part, I had four dreams of Kong Hee that's all positive. So did it come from devil or God or conscious or subconscious, so I thought I'd come here to see if it shows up."