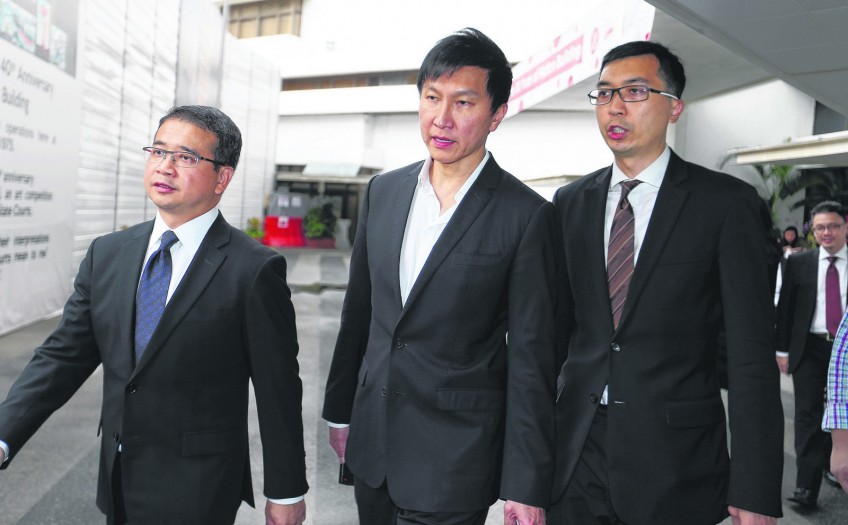 Kong Hee, founder of the City Harvest Church (CHC) and five other church leaders were found guilty of misusing around $50 million of church monies to fund his wife 's pop music career and to cover up the misdeeds
The Straits Times

Making it clear that the church's 51-year-old founder Kong Hee was the mastermind behind the conspiracy to cause wrongful loss to the church and defraud auditors, the judge sentenced him to eight years in jail - the longest of the six.

Calling Kong CHC's spiritual leader, Judge See said he was "the prime mover and driving force for the Crossover", referring to the project to promote his wife's pop career using millions in church funds. "The others looked to him for direction and took their cue from him."

Leaving the courtroom, Kong was mostly silent when surrounded by reporters and cameramen. His wife Ho Yeow Sun was surprisingly not present in court yesterday, at the end of the 142-day trial. When asked why, he could only manage a weak smile.

Later in a Facebook post, Kong wrote: "Unfortunately, I must continue to face some very difficult days ahead." He added that he would study the court's judgment before deciding whether to appeal.

All six have 14 days to file a notice of appeal.

After being sentenced, they emerged from the courtroom after frantic discussions with their lawyers. Former CHC fund manager Chew Eng Han had bloodshot eyes when he told The Straits Times: "No comment, you already know I want to appeal." He was sentenced to six years' jail.

Judge See said the other accused had "relied heavily" on the 55-year-old's expertise.

Deputy senior pastor Tan Ye Peng, 43, faces a 51/2-year term in prison. Speaking on his behalf, his lawyer N. Sreenivasan said: "This has been a very trying case. He needs to pray, reflect and discern, before deciding what to do."

Tan Ye Peng had a blank look when he left, but he was not the only one who was at a loss for words.

Former CHC finance manager Serina Wee, 38, appeared to be on the verge of breaking down when members of the media approached her.

Her husband, Mr Kenny Low, said: "We are thankful that we are able to have some time to go back and settle our family, and to think about what's ahead."

The court has deferred the start of their sentences to after Christmas, beginning on Jan 11 next year.

"But it's quite clear that our faith is in God and we love CHC very much," said the 47-year-old, who was sentenced to three years' jail.

CHC finance manager Sharon Tan had the lightest sentence of 21 months. Her lawyer Paul Seah said he would discuss with her before deciding what to do.

The Commissioner of Charities yesterday made it clear that it would be resuming proceedings - held over because of the trial - to remove the accused from their positions in the church.

They will be barred from acting as board members, trustees or key officers of any charities.

All six were found guilty last month of misusing $50 million in church funds. They had funnelled $24 million into bogus bonds to fuel Ms Ho's career. A further $26 million was used to cover their tracks.

Evidence was presented during the trial to show that the accused, keenly aware of the National Kidney Foundation and Ren Ci charity scandals, decided to shroud their use of the church monies for Ms Ho's career.

Judge See yesterday called the case unique and without precedent, agreeing with the defence's constant refrain that there was "a lack of any personal wrongful gain, any motive of self-interest or enrichment, and the absence of an intent to cause permanent loss" to the church.

The funds were also ultimately returned. But these do not change the fact that the accused were guilty of serious offences and breaches of trust involving large sums of charity money.

This article was first published on Nov 21, 2015.
Get a copy of The Straits Times or go to straitstimes.com for more stories.