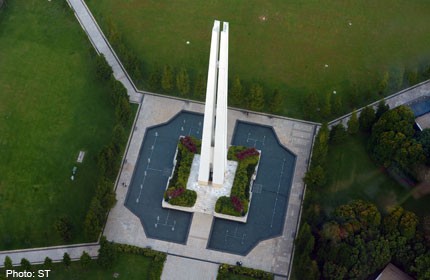 And the first structure gazetted as a national monument under the newly named division is the Civilian War Memorial, which is dedicated to the memory of civilians who perished during the Japanese Occupation from 1942 to 1945.

The gazetting was done on last Thursday by the National Heritage Board (NHB), which oversees the division.

Last week, it said in a statement that the Aug 15 date was chosen to commemorate the ending of the Second World War in the Asia-Pacific on Aug 15, 1945.

The move to gazette the memorial on Beach Road near City Hall MRT was announced in February by Acting Minister for Culture, Community and Youth Lawrence Wong.

It ensures that the four-column structure - the only memorial in Singapore that commemorates civilian war victims - will be preserved in its original state over the course of time.

Plans to build the memorial had surfaced in 1962 after a large number of remains were found in several locations across Singapore. On Feb 15, 1967, then Prime Minister Lee Kuan Yew unveiled the 67m structure and its surrounding park. The four columns, which taper towards the top, represent the four main racial groups in Singapore.

The director of the newly named division, Ms Jean Wee, said: "The Japanese Occupation was a heart-rending episode lived through by many of the older generations of Singaporeans.

"The gazetting of the Civilian War Memorial thus encapsulates our resilience as a nation, and commemorates how the nation came together in crisis."

Added retired colonel John Morrice, 78, former president of the Singapore Armed Forces Veterans' League: "It is important and timely that we give a proper honour to the many Singaporeans who were massacred in the war."

The memorial is the 65th monument to be gazetted. The NHB has also marked out 100 historic locations, such as Alexandra Hospital and Changi Beach, as heritage sites.