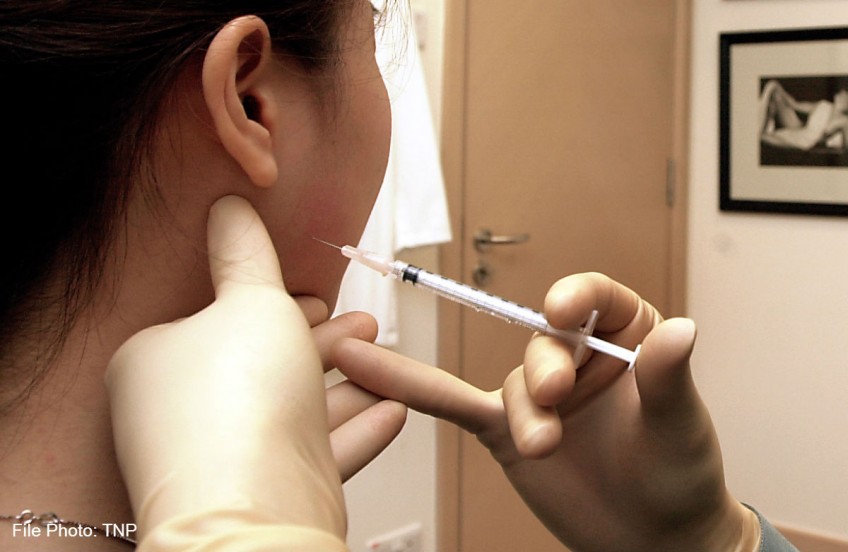 Clinics hoping to offer certain aesthetic treatments that the Ministry of Health (MOH) deems questionable will no longer be given the green light to perform them.

In a circular published earlier this month, the ministry highlighted a series of treatments, including whitening jabs and certain fat-busting injections, which it will no longer give approval for clinics to start carrying out.

It had studied these treatments and found that the results for them were largely inconclusive, the MOH said.

It also noted that "the documentation of the procedures remained poor and outcomes were generally inconclusive".

Those currently performing these procedures must publish treatment outcomes within six months, or stop performing them altogether.

Only treatments that do not fall under the MOH's approved list will be subject to the new rules. The well-established ones, such as liposuction and chemical peels, which are backed by medical evidence, will not be affected.

The MOH will then decide if there is enough evidence to allow them to proceed.

This is not the first time such procedures have been singled out. In 2013, the MOH made it a requirement for clinics providing such services to have their licences renewed more frequently.

Most doctors whom The Straits Times spoke to said they had stopped carrying out these procedures years ago.

General practitioner David Loh, who runs his own clinic, stopped offering mesotherapy - in which a drug cocktail is injected into the skin to "melt fat" - in 2006 as he doubted its safety after the market was flooded with many different products.

"Things spiralled out of hand and I was beginning to question the safety of it all," he said.

Others said there were too many restrictions surrounding such procedures to make carrying them out worthwhile.

"This is impractical in private practice," said Dr Vicki Leong of Nu.Reflections Medical Aesthetics, which stopped doing carboxytherapy in 2008.

Dr Siew Tuck Wah of The Sloane Clinic said new and more effective body-toning treatments have been developed since then. He, too, no longer carries out the questionable treatments.

"At that time, we didn't have any better choice," he said, referring to the period when those treatments were popular. "But now there are approved treatments that have undergone rigorous testing."

But doctors pointed out a loophole in the new ruling - while licensed medical clinics cannot carry out these questionable procedures, there is no rule stopping beauty parlours from offering them.

When asked, the MOH said people who have doubts about any new aesthetic procedure should seek a doctor's second opinion.

Dr Siew said: "It is a big flaw in the system, where doctors are regulated but oftentimes non-doctors in the same industry are not."