Clean rivers, thanks to Mr Lee 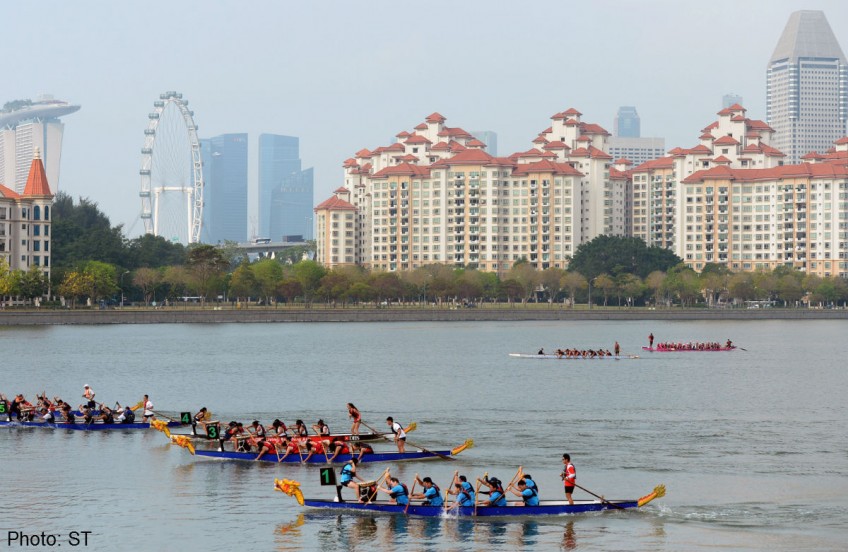 Former prime minister Lee Kuan Yew's vision and role in cleaning up Singapore's rivers and starting the push towards water self-sufficiency decades ago were highlighted as World Water Day was celebrated here yesterday.

At the Singapore Sports Hub, where activities ranged from kayaking to Zumba, Deputy Prime Minister Teo Chee Hean said the country's clean rivers were a result of Mr Lee's determination and vision.

Referring to the Kallang River next to the Sports Hub, Mr Teo said: "Right here on this river in the 60s and 70s, where the water was black, oily and dirty, he had the vision to think of this place as a beautiful bay that we could clean up and enjoy."

Mr Lee is seriously ill at the Singapore General Hospital and yesterday, thousands of people went there and to the Tanjong Pagar Community Club to leave flowers and good wishes for him.

At the Sports Hub, Mr Teo said: "Let us all wish Mr Lee strength for his recovery."

At Jurong Lake, where people took part in a 2km walk and qigong, Ms Grace Fu, Second Minister for the Environment and Water Resources, said: "We owe it to Mr Lee that we can proudly say today that through 30 to 40 years of research and development, as well as hard work, we have almost reached water self-sufficiency."

She urged Singaporeans to continue to keep all the country's water sources clean, conserve water and treat it as a special resource. "If we are able to carry on this good work, Singapore would have a bright future from where Mr Lee has left us," she added.

Ms Fu also announced that from October the minimum water-efficiency standards for washing machines will be raised from one tick to two ticks. Compared with one-tick models, two-tick washing machines can save more than 20 litres of water per wash on average.

Mr Teo urged visitors at the Sports Hub to practise simple water-saving habits, such as washing clothes on a full load at home.

He pointed out how Singapore experienced a significant dry spell last year, with February 2014 being the driest month in almost 150 years. There was a repeat of dry weather earlier this year, although it was less severe.

Water demand is also expected to almost double by 2060 from the current 400 million gallons a day (mgd).

Singapore is investing in infrastructure ahead of demand, he said.

A second Newater plant at Changi, when completed next year, will see Newater capacity increase by another 50mgd.

A third desalination plant in Tuas, scheduled to be completed in 2017, will add another 30mgd to Singapore's water supply.