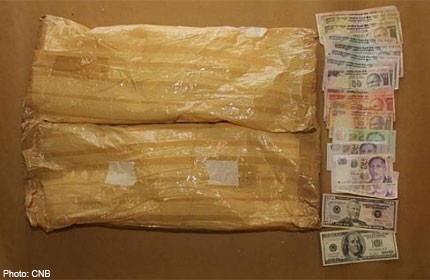 The drugs were found in a luggage registered to a 22-year-old female Vietnamese national, who was subsequently arrested at T3. She was scheduled to leave for a third country in the region.

Here is the press release in full:

On 23 August 2013, the Central Narcotics Bureau (CNB) seized about 6.25kg of 'Ice' at the Changi Airport Terminal 3. This is the largest 'Ice' seizure in a single operation for the year so far.

ICA officers detected anomalies in the luggage upon screening.

The owner of the luggage, a 22-year-old female Vietnamese national, was arrested at Terminal 3. She was scheduled to leave for a third country in the region. A detailed search of the luggage was done and about 6.25kg of 'Ice' worth about S$1.25m were found hidden in the false side compartments of the luggage.

Director CNB, Mr Ng Ser Song said, "I would like to thank all the Home Team officers for their efforts in this operation. CNB will not hesitate to take action against the drug offenders who make use of Singapore's excellent connectivity as a transit hub for illegal drug activities and we will continue to intensify our enforcement efforts."