CNB seizes heroin 'enough to sustain 615 addicts for a week' 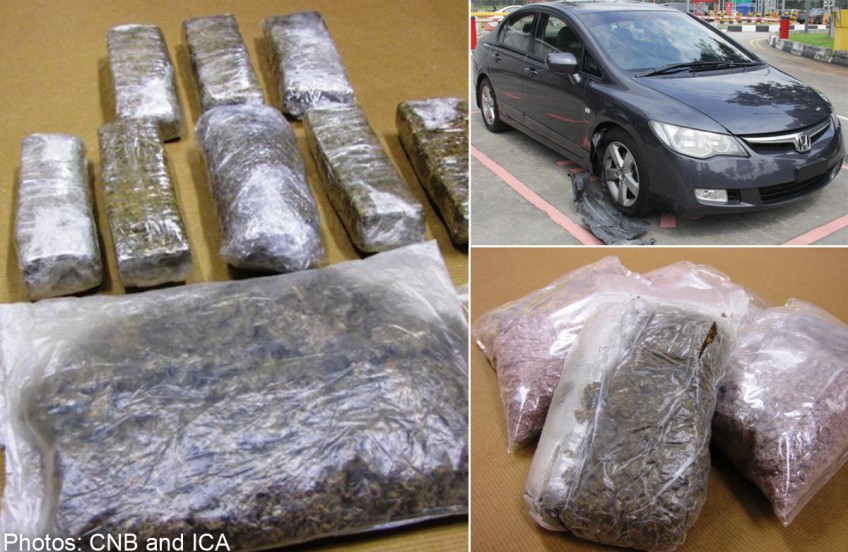 SINGAPORE - Over 2.2kg of drugs worth about $170,000 were seized by the Central Narcotics Bureau (CNB) on Friday, following an earlier seizure of drugs at the the Woodlands Checkpoint on the same day, the Immigration & Checkpoints Authority (ICA) and CNB said in a joint statement on Saturday.

ICA officers stopped a Malaysia-registered car driven by a 33-year-old Malaysian man on Friday at about 8.45am for a rountine check.

Bundles wrapped with black masking tape containing a total of about 1,153g of heroin and 185g of cannabis, with a potential street value of more than $127,000, were found hidden in the car's front fenders.

CNB officers later launched a follow-up operation to nab other drug offenders suspected to be involved in the same case.

An assortment of drugs, including about 136g of heroin, small amounts of Ice, Ecstasy and Erimin-5 tablets, along with drug-related paraphernalia were seized from the unit.

About an hour later, three males between the ages of 27 and 38 from were arrested by another group of CNB officers at an HDB unit in Tampines. All three men are Singaporeans.

About 700g of cannabis, 371 Erimin-5 tablets and small amounts of Ice and heroin were recovered from the unit.

The total heroin seized in all the raids would sustain about 615 addicts for a week.