Compromise is a good start in book-pulping controversy 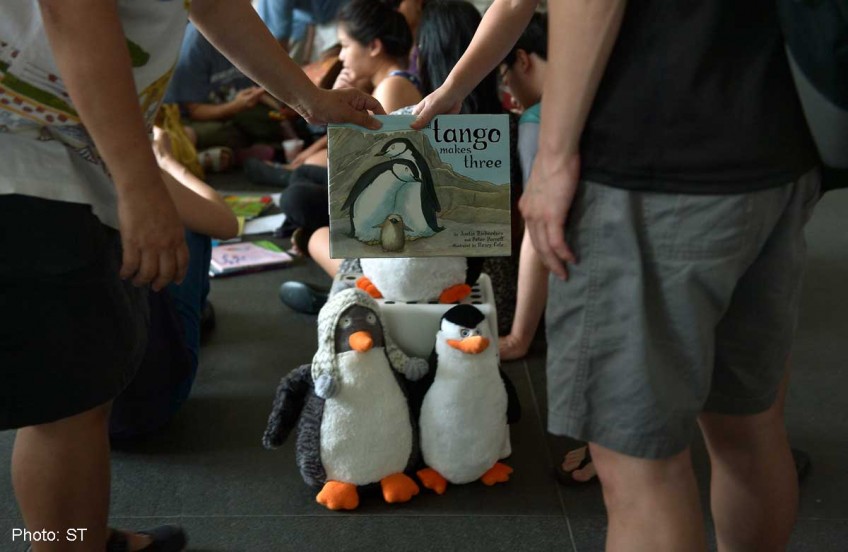 Reason has prevailed in the controversy over the National Library Board's (NLB) withdrawal of two children's books deemed to have homosexual content.

The decision to move the books - And Tango Makes Three and The White Swan Express: A Story About Adoption - into the adult section is a good compromise.

As a parent, I support the compromise, which basically cedes the decision to parents whether to expose the books to their children.

Which is as it should be. Among other things, parents should be given the right to choose what their kids can read or watch. And parents must exercise this right, or someone else will decide for them.

But the fact that it needed Minister for Communications and Information Yaacob Ibrahim to step in with this solution reflects poorly on the NLB.

DISASTER The NLB's handling of the issue has been a public relations disaster. When a member of the public complained about the books, it replied in an e-mail that the books had been removed.

The complainant posted the NLB reply in the Facebook group We Are Against Pinkdot In Singapore, which revealed his agenda and immediately sparked a storm.

Full marks to the NLB for transparency, but if ever a government agency or statutory board needed to be more equivocal in a reply, this was it.

A response along the lines of "Thanks for your feedback. We will look into it" would have taken away the sting of the reply being made public.

The real sting came when the NLB announced that the withdrawn books would be pulped, provoking a bigger outcry. Destroying books in this day and age just because they reflect alternative views is anathema to many people.

To be fair, once the issue reared its head, it was a no-win situation for the NLB.

Caught between the lesbian, gay, bisexual, and transgender group and the anti-gay lobby, or "pro-family" as they prefer to bill themselves, which are known for their strident views, there was no middle path to be forged.

The compromise, at least, pleases the third faction to some extent - parents like me who are concerned about their freedom of choice on how to raise their children being usurped on account of others who have agendas.

I have no problems with other people leading their lives as they see fit, but I strongly object to them forcing their values on me and my family.

It's accepted that Singapore society is still largely conservative. But being conservative doesn't have to mean being close-minded.

Sadly, there are still people who think that Aids is God's punishment for homosexuals.

Call me a bland middle-of-the-roader, but I am all for compromise.

I don't think the two books should be exposed to children without parental supervision, not because reading them may turn them gay but because their nascent minds may not process the complex issues.

But I also wonder whether moving children's books to the adult section is the best solution. Would starting a sub-section in the children's section to contain books that require "parental guidance" be viable?

Still, the current compromise is a good start. And the fact that the Government is willing to listen to dissenting views and change its mind is a vital step towards Singapore becoming a mature, progressive and thinking society.

I wonder whether moving children's books to the adult section is the best solution. Would starting a sub-section in the children's section to contain books that require "parental guidance" be viable? - Mr Saw Tek Meng tekmeng@sph.com.sg