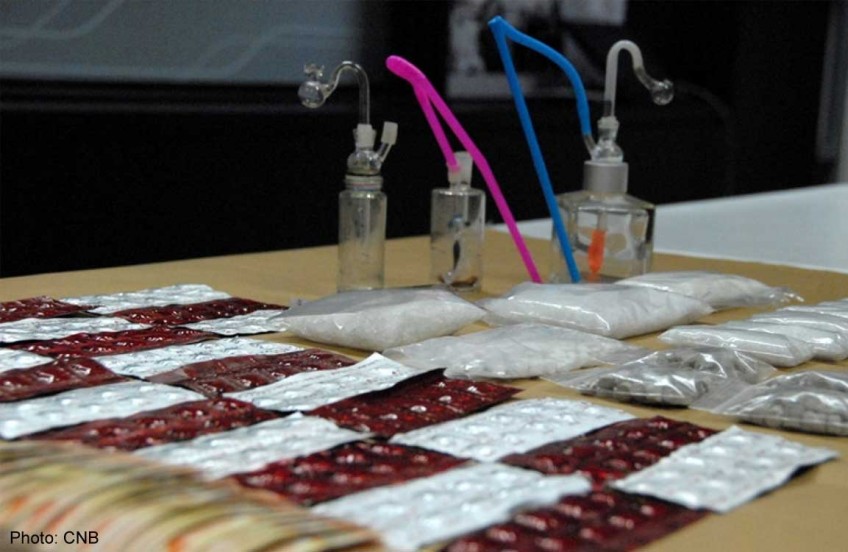 KUALA LUMPUR - Police believe they have crippled a drug syndicate following the arrest of five suspects, including a woman, at a terrace house in Setapak here.

Wangsa Maju OCPD Supt Nor Azman Yusuf said the suspects, aged between 22 and 49, were picked up at about 1am last Wednesday.

He said police seized a total of 585 ecstasy pills, 13 methamphetamine pills (pil kuda), 65g of ketamine powder and 7g of syabu at the premise.

"The street value for all the drugs combined is about RM50,000 (S$19,500)," he said at a press conference at the district police headquarters yesterday.

Checks by police revealed that the suspects were unemployed.

Supt Nor Azman added that the suspects were also tested positive for drugs.

"The four men have past convictions involving substance. All of them are under remand for a week," he said.

The syndicate was said to have been actively selling drugs in Setapak area for the past three months.

"We believe that there are other members in this syndicate. We are in the midst of identifying them," he said.

In a separate case, a 32-year-old man was picked up at a house in Kampung Padang Balang, Setapak, last Friday for possession of drugs.

Supt Nor Azman said police found 50 packets of powder, believed to be heroin, at the premise.

"He lived alone at the rented house and did not have a real job. He will be remanded until July 18," Supt Nor Azman added.

The cases are being investigated under Section 39B of the Dangerous Drugs Act 1952, which carries the mandatory death sentence upon conviction.

Meanwhile, 1,695 computers, believed to be used in gambling, were seized in a series of raids by the Wangsa Maju district police.

Supt Nor Azman said 985 premises had been checked since April.

"A total of 93 people were also arrested during that period for their involvement," he said.