Coronavirus: In Singapore, small religious groups pray for survival as donations dry up

Priests at Sri Krishnan Temple conduct prayers for devotees who are at home.

This was supposed to be a momentous year for the Sri Krishnan Temple, a Hindu temple located in downtown Singapore.

It was planning to celebrate its 150th anniversary with a big bash, with bursaries slated to be given out to tertiary students.

Then the coronavirus outbreak hit. With a blanket ban on all religious gatherings enacted in the city-state since March 26, the temple has been empty and eerily quiet.

Collections fell by 45 per cent between January and March this year, compared with the same period last year. The Sri Krishnan Temple is burning through cash reserves to pay for utilities and wages for its 10 workers.

The only inflow of cash currently comes from payments made by devotees for temple prayers.

If the situation does not improve quickly, the temple could even resort to tapping a sum of money that has been set aside to extend the lease of the land it sits on, when it expires in 2028.

"We hope we don't have to touch the fund," said temple chairman P. Sivaraman. "We have no idea how long this pandemic will go on and how fast we can recover. A hand-to-mouth situation could arise."

On the other side of the island, the 16,000-member City Harvest Church (CHC) is flexing its financial muscles to help affected members.

The megachurch's CHC Care Fund, which a church spokesperson said was a six-figure sum, offers help to members who have experienced job losses or pay cuts of more than 30 per cent, as well as those with insufficient household savings.

And while many firms are retrenching staff during this period to cut costs, the church is seeking to hire. On its sleek-looking app, there is a new section advertising jobs for the church, targeted at those who have lost their jobs due to the pandemic.

City Harvest is one of the richest charities in Singapore, with reserves of $132 million posted in 2018.

It also owns a 39.2 per cent stake in one of the country's premier convention centres, the Suntec Singapore Convention & Exhibition Centre, which it acquired for almost $100 million in 2012.

The pandemic has shown up a great disparity in the various religious organisations within the city-state.

While the bigger groups are well buffered against the storm with millions in reserve, the financial damage wrought by the Covid-19 disease could potentially spell the end of some smaller religious groups.

For religious groups, running operations is a costly affair, with money poured into renting premises and hiring full-time staff.

As charities, religious organisations are governed by strict rules over fundraising. They rely primarily on donations from devotees.

And while they can set up businesses to generate additional income, few do so, partly due to a lack of expertise but also because mixing business and religion remains taboo.

Hence, when revenue from donations dries up, the hardest hit are the smaller groups, which do not have the scale or ability to ride out the storm easily.

A preacher from a 70-member independent church in central Singapore said that if the pandemic continued keeping people at home, his church would consider pooling resources with other churches.

Their biggest worry? The loss of members. "Most leaderships will have concerns over members leaving and how many they can retain," he said.

Likewise, the future of the Taoist Choa Chu Kang Combined Temple is clouded with uncertainty. Its cash inflow has slowed to a trickle since it closed its doors on March 27.

It has about 20 regular devotees but sees its numbers swell during religious festivals.

"We don't do online banking. Currently, the only way is to make donations at the temple," said Ivan Teo, a volunteer at the temple. "We just hope that this Covid-19 situation will end soon."

This also means that social welfare services, such as soup kitchens, may have to be cut back.

Sivaraman from the Sri Krishnan Temple said: "Now we have to think three times when we want to give back to society. We have to look after our own staff first and rituals must go on."

Although the scale of the pandemic means that no religious groups will emerge unscathed, the bigger groups are better poised to weather the storm.

After Catholic masses were suspended in February, contributions to the Society of St Vincent de Paul charity fell by a staggering 90 per cent.

The charity quickly responded by launching an online appeal for donations from the community of nearly 400,000 Catholics in Singapore.

Florence Tan, the charity's president, said they collected more than $614,000 from the appeal, which funded the organisation through March and April.

These additional funds have bolstered the charity's social outreach efforts, with assistance given to over 2,000 families across the country. 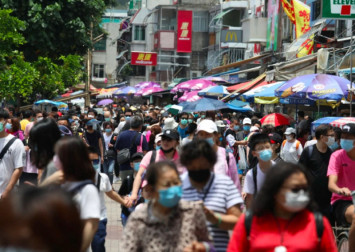 Going digital has also given the Methodist Church, one of the largest Protestant groups in Singapore, a lifeline.

The church's charity arm, the Methodist Welfare Services, helps about 12,000 people in the city-state.

Many of its 46 churches display a banking QR code on-screen at the end of weekly broadcast services for worshippers to make offerings.

Even so, donations from the Methodist Church's 44,000 members had fallen by between 10 and 40 per cent, said Anthony Goh, chairman of the council of communications.

Although weekly collections had been affected, there was still a stable source of income because members pledged to give a regular amount of their choice for each budget year, he said.

"We have also set up reserve funds which may need to be drawn upon if this situation is prolonged," he added.

Sikh temples, or gurdwaras, are also relying on years of prudent savings.

The temples are run mostly on donations, which are estimated to have dropped by 60 per cent to 70 per cent, according to Inderjit Singh, chairman of the Coordinating Council of Sikh Institutions.

For now, Singh said they were drawing on their savings for maintenance costs and social outreach programmes. "Fortunately, the gurdwaras have been very prudent in their finances and all of them have reserves accumulated over the years. They are utilising these reserves to help cover [expenses] during this period of lockdown."

For others, cuts in budgets for salaried staff and other operations may have to kick in sooner rather than later.

The 200-member Singapore Bible Baptist Church, which has seen collections decline by 20 to 30 per cent, will resort to pay cuts if the situation does not improve.

"I believe we can tide over this period as our staff are willing to have their pay reduced if necessary," said the church's pastor, Davy Sim. "Times are challenging but we trust God to see us through this difficult time."