Coronavirus: Singapore's testing rate is tops in Asean, with over 1m swabs done

Singapore has conducted about 177,000 swabs per million population as at July 13, the highest rate among Asean nations.

Testing is one of Singapore's key strategies to contain the spread of the coronavirus here, as it allows for the early detection and ring-fencing of cases before they infect others.

Last month, Health Minister Gan Kim Yong said that the Republic was ramping up its testing capacity and aiming to be able to conduct 40,000 tests a day in the later part of the year.

Plans were also announced for a fifth centre to be opened at 7 Bedok North Street 2, the former Sepak Takraw Sports Hall.

While the Republic is not adopting the strategy of mass-testing its entire population at one go, the authorities have repeatedly said that proactive screening of target groups, including the elderly and healthcare workers, will be carried out.

Read Also
Coronavirus: See a doctor even if it is just a sniffle, advises Lawrence Wong 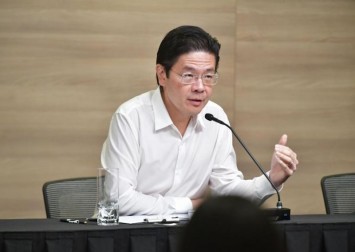 Last month, about 600 swabs a day were taken from patients with acute respiratory infections.

This month, the criteria for testing those with such infections for Covid-19 were expanded to include such patients aged 13 and above.

MOH also said on June 25 that it has plans to test front-line staff interacting with travellers as Singapore reopens its borders.

Singapore has conducted about 177,000 swabs per million population as at July 13, the highest rate among Asean nations.

According to global statistics site Worldometer, Brunei is second to Singapore with about 68,000 tests per million population.

At the start of this month, National Development Minister Lawrence Wong, who co-chairs the multi-ministry task force tackling Covid-19 here, said that the local authorities are now moving in "a lot faster" when a case tests positive.

"(When) we know that there is a case, we immediately go in to identify a larger group that potentially might be close contacts, and we quickly test them and isolate any potentially infected persons. That's the new way of operating in this phase because of our increased capabilities in testing and tracing," he said.

However, Mr Wong added: "While we have this enhanced testing and tracing capability, I think we should not take it for granted that this system is foolproof and we can catch every single case.

"We should not push the system to its limits; we should not be taking unnecessary risks."