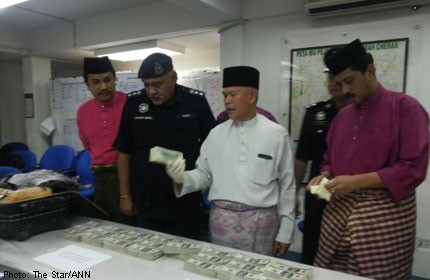 KUALA LUMPUR - Police have seized counterfeit US currency totalling US$500,000 (S$630,400) with the arrest of two foreigners. The two, a British and a Guinean man, are believed to be operating a counterfeit money laundering syndicate and have duped several victims of more than RM50,000.

"The woman claimed that she had met the two suspects via Facebook last September. They met in Singapore and the suspects offered her a money laundering project which they claimed could triple her capital," he told reporters at the Cheras police headquarters on Thursday.

He said in July this year the suspects demonstrated to her, at a house in Desa Petaling, how using certain chemicals would help "process" imperfect counterfeit notes and make them "original".

"Based on our investigations, the suspects duped the woman by using six original USD notes by 'processing' these and asking her to change it at a money changer to verify that it was original," he said ading that the woman then changed the notes at a money changer at KL Sentral.

SDCP Mohmad said the men told the woman that she only needed to sponsor cash to buy the chemicals.

"A few days later, the woman gave one of the suspects US$13,000 to start processing the notes.

"The other suspect began processing the notes in front of the woman and the notes started changing into a black colour," he said, adding that the suspects then told the woman that the chemicals were "spoilt".

He said the suspects asked the woman for another US$5,000 but she said that she had exhausted her funds.

"She later lodged a police report on the matter," he said adding that police raided a restaurant in the City on Aug 1 and arrested both men aged 32 and 46.

SDCP Mohmad said the two men then led police to the house in Desa Petaling where police seized 4,896 counterfeit US$100 notes.

"We have remanded the two men till Aug 21," he said adding that the case was being investigated as cheating under Section 420 of the Penal Code.

SDCP Mohmad urged the public not to fall for these get rich quick scams.

"It is often too good to be true, but many people still fall for it out of greed," he said.