Couple spends over $3,000 to hire maid to take care of baby, only to find out she's pregnant

Imagine hiring someone to take care of your child, only to discover that she too, is carrying one of her own.

After spending over $3,000 on agency fees to hire a domestic helper to look after their four-month-old baby, a couple found out that she was pregnant in the first month she started working at their household, Shin Min Daily News reported.

On Sept 2, the maid left the house at 11am, saying that she was going to visit the dentist to treat her toothache. She returned at 5pm, and told her employers that she had incurred a dental bill of $200 without providing a receipt.

Wanting to help foot the bill, the couple called the dental clinic but were told that there was no such bill.

It turned out, their domestic helper had gone out to look for her boyfriend — a Malaysian foreign worker that she had met in Singapore while still working for her previous employer — who had ghosted her.

"She cried and told us that she might be pregnant. We were shocked," the husband, a 36-year-old sales manager, told the Chinese daily.

At a loss, the couple took their maid to undergo pregnancy tests and asked if the maid agency could help them resolve the issue.

Unfortunately, the agency refused to take her back and insisted that she could continue to work, they said.

Fearing that the maid would have to sleep on the streets if they didn't fork out money for her accommodation, the employers took her home.

Worried that she would lose her job over a possible pregnancy, their helper became very emotional, the couple said, adding that they noticed she had changed her WhatsApp display image to one that mentioned death.

"We would wake up in the middle of the night to check on her. We were worried that something would happen to her, which would result in the loss of two lives," the employer explained. 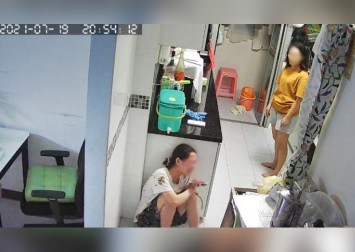 According to his wife, also 36, who works as an accountant, the maid told them she did not want to keep the baby as the child would be fatherless and she could not afford to raise the child on her own.

She also tried to induce a miscarriage by consuming cold medication, as well as buying papaya and acquiring abortion pills.

Test results confirmed that the domestic helper was five to six weeks pregnant. Worried about her safety, the couple approached the maid agency for help once again.

The agency finally took the maid in and sent her back to her home country on Sept 11.

Couple disappointed with maid agency, made reports to police and MOM

Even after sending the maid home, the couple said that the agency did not provide her replacement until Sept 21.

They have since made a report with the police and Ministry of Manpower, saying: "We hoped that the agency would either give us a new maid, or provide a refund, but they haven't been responding to us.

"We even personally contacted the boss, but the matter has yet to be resolved, so we're very disappointed," the employers said.

The police confirmed with Shin Min that they received a report regarding the incident.

Meanwhile, the maid agency told the Chinese daily that the matter was a "regrettable incident", and declined to comment further due to the private nature of the incident.

The couple has since hired a new maid after insisting that she undergo a medical examination and a pregnancy test.

"We paid $3,000 to learn a lesson, we hope to remind other employers to be careful and to send their maids for medical examinations or pregnancy tests before hiring them."