Ms Nuraidillah and Mr Firman Akhfar with their two-year-old daughter Nurdaneya Filza, two, and their newborn son Muhammad Aqil Fayyadh, both of whom were born on National Day.

SINGAPORE - A Singaporean couple welcomed their second National Day baby at the stroke of midnight on Thursday (Aug 9).

The nation's first new citizen of the day, which commemorates Singapore's 53rd year of independence, was born at Parkway East Hospital two years to the day that his sister arrived.

As soon as baby Muhammad Aqil Fayyadh was delivered safe and sound at 23 seconds past the hour, the doctor broke into a rendition of Majulah Singapura, his mother Nuraidillah, 29, told The Straits Times.

Both Aqil Fayyadh and Nurdaneya Filza had due dates in the second half of August and were early surprises, said their father Firman Akhfar, 29, a prime mover driver. 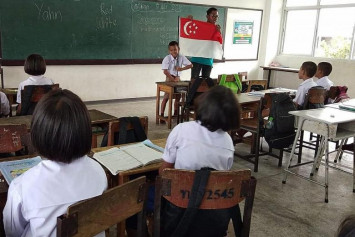 "He was due on Aug 18, but yesterday I started to have contractions so we decided to come in. The labour this time was shorter and I was more prepared after having the first one," said Ms Nuraidillah, an architecture draftsman.

After three hours in labour, baby Aqil Fayyadh, whose name means intelligent and generous - traits the couple hope their son will grow to possess - was delivered healthy and weighing 3.4kg.

On Thursday afternoon, the hospital presented the family with a cake in the shape of a Singapore flag to celebrate the children's birthdays.

The couple, who have been married for three years, said it was a pleasant surprise to have both of them born on the same day.

Said Ms Nuraidillah: "It's a double celebration to have both kids share the same birthday, especially on National Day. They're celebrating with Singapore too."