To cover or not? Photo of mum breastfeeding on MRT train divides the Internet 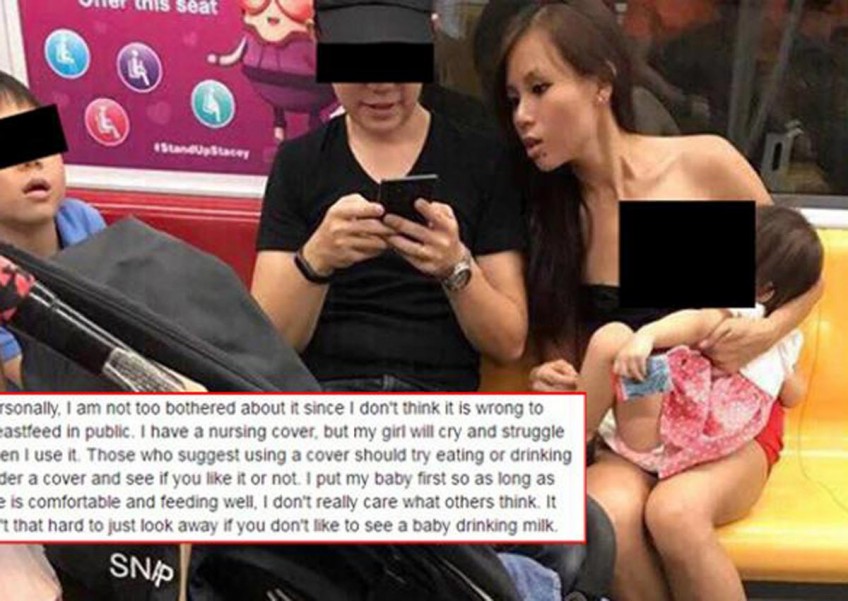 A photo of a mother breastfeeding on an MRT train while in full view of the public recently went viral, with some showing their support for her while others expressed criticism.

The picture, which Stomp contributor Chris alerted us to, has been circulating on WhatsApp and on local forums, sparking a heated debate.

It shows the woman seated beside her husband with one side of her top pulled down and her left breast exposed, as her young daughter feeds.

Some netizens felt that the image was provocative and said that even if her child was hungry, the mother should have at least made an attempt to cover up more.

Others, however, said that she did nothing wrong as breastfeeding is a mother's right.

The woman in question has since responded to the incident on Facebook, explaining her stance on the matter.

In a public post accompanied by another picture of her breastfeeding her kid, she wrote:

"I know that a picture of me breastfeeding is being shared right now. I am ok with it. Thanks for the concern to all those who have pmed me. Personally, I am not too bothered about it since I don't think it is wrong to breastfeed in public.

"I have a nursing cover, but my girl will cry and struggle when I use it. Those who suggest using a cover should try eating or drinking under a cover and see if you like it or not.

"I put my baby first so as long as she is comfortable and feeding well, I don't really care what others think. It isn't that hard to just look away if you don't like to see a baby drinking milk.

"I just want to dress up and be a normal woman while still being able to take care of my kids and their needs. If people are ok with women who show cleavage, I don't know why they would not be ok with me breastfeeding. Unless these group of people think my breast is for sex and not for feeding my baby.

"Anyway, it's just a breast. We all have it. Be it female or male. It's meant to be used to feed a baby, I don't see anything wrong with using it to feed a baby and ensuring my baby is comfortable. What's so sexual/wrong about it? Hahas! Maybe girls should stop eating bananas/popsicle in public as some might find it sexual too."

The mother's post has been met with positivity from netizens, many of whom said they were proud of her and would stand with her.

One user commented, "I've seen the picture and I actually beamed with pride when I saw it. You are as awesome as awesome can be. We should be able to feed in public without any stigma and without people staring like perverts."