Crackdown on fireworks smugglers in Malaysia 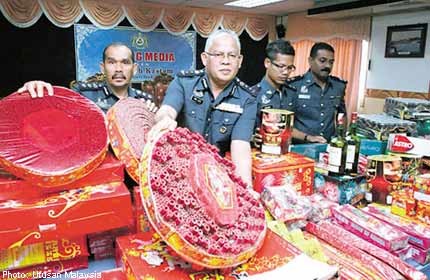 TUMPAT, Malaysia - The Malaysian Maritime Enforcement Agency (MMEA) has identified five "hot spots" for the smuggling of firecrackers and fireworks along Sungai Golok.

Kelantan MMEA enforcement chief Captain Wan Burhanuddin Yusof said Geting beach and Pengkalan Kubor were two of the usual routes used by smugglers to bring in firecrackers from across the border.

"We have also identified Kuala Besar in Kota Baru and Kemasin in Bachok as locations where the smuggling of firecrackers is rampant.

"We suspect the smugglers chose these areas as the rivers are shallow here. This makes it easier for their boats to pass through.

However, MMEA patrol vessels have difficulty travelling in shallow waters."

Wan Burhanuddin said the agency would continue to track down the smugglers, including conducting 24-hour surveillance against any smuggling attempt.

On the latest raid, he said RM70,000 worth of firecrackers and fireworks were seized here on Monday.

No arrests have been made.

"Our officers spotted a boat laden with boxes during a routine check in Kuala Besar. They gave chase. However, the boat operator abandoned the vessel upon reaching the shore and fled on foot. The officers found firecrackers inside the boxes."

In Kuala Besut, a 22-year-old unemployed man was detained at his house in Kampung Paya Rawa here for possessing firecrackers, believed to be for sale, on Sunday.