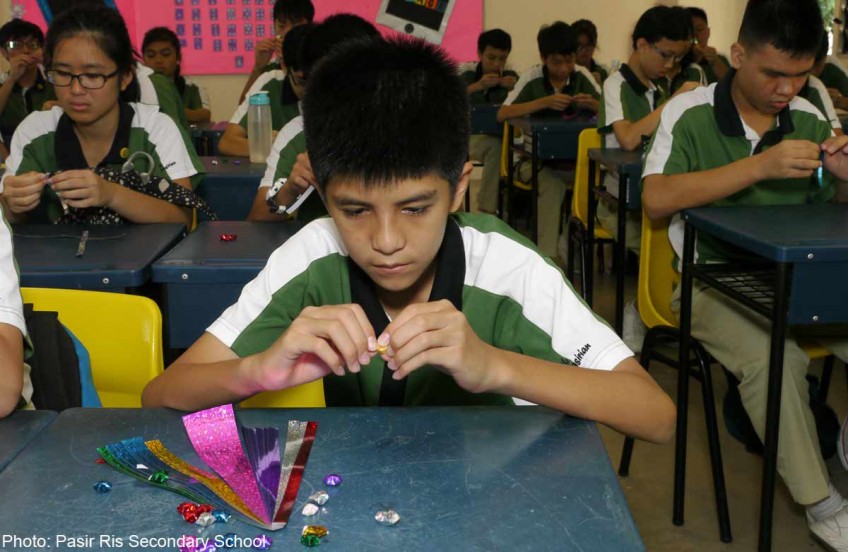 Ahmad Nabil, 13, was one of them. Standing at the front of the classroom, facing 50 six-year-old pre-schoolers, he held up a ceramic model of a mouth and explained the proper way of brushing teeth.

He and his school-mates were taking time off from their usual lessons for 30 Acts of Kindness, an event organised by the school as part of its 30th anniversary.

Each of the school's 30 classes, numbering more than 1,200 students in all, participated in community projects organised by the students.

For Ahmad's Secondary One classmates, their act of kindness took them to Tampines East Education Centre where they entertained and educated pre-schoolers with dental hygiene lessons and a skit on friendship.

Principal Hilda Thong was also heartened by another group of students who came up with "innovative" games for pre-schoolers, such as filling plastic bags with barley to make "beanbags" which the children had to balance on their heads. "This is the side of my students that you don't see every day," she said.

Other students packed and delivered food to the needy, or visited the elderly at nursing homes.

In addition to 30 Acts of Kindness, the school aims to raise $30,000 this year for beneficiaries such as Tampines East Silver Connect and Willing Hearts by folding 30,000 paper stars.

For each star, a dollar has been pledged to the fund by donors in support of the cause which include members of Pasir Ris Secondary School's School Advisory Committee.

In the light of Mr Lee Kuan Yew's passing on Monday morning, the school decided that 30 Acts of Kindness would be a tribute to Singapore's founding father.

"All his life, he served the nation with conviction to make Singapore a better place. In the same way, today we will replicate the values he lived by," Mrs Thong said at the event launch yesterday.

Ahmad said that Mr Lee was instrumental in Singapore's success. "I will remember him as a great man."