CTE to get two new parapets to boost safety 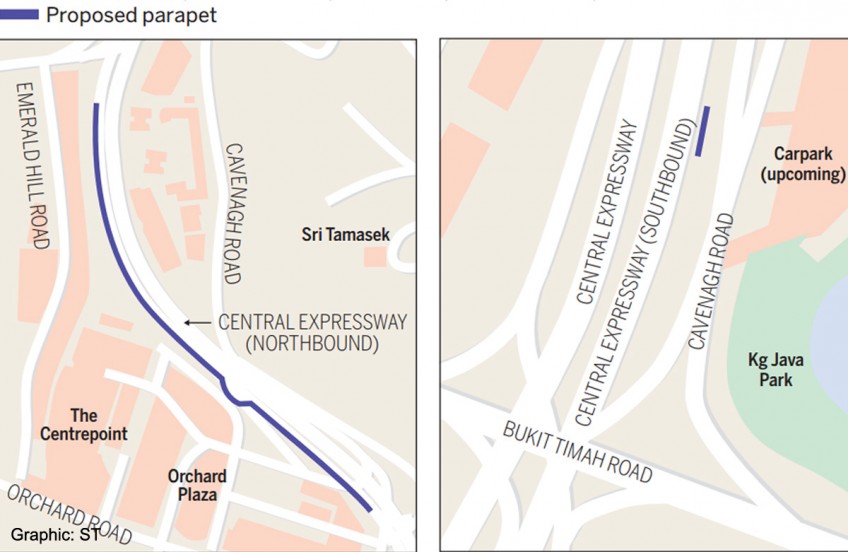 New parapets will be built at two stretches on the Central Expressway (CTE) to enhance safety for highway users.

They will be constructed on a section of the expressway next to Kampong Java Park, in the southbound direction, and on a stretch between Orchard Road and Cairnhill Circle, in the northbound direction.

The concrete barriers will be about 1m in height, with the one near Kampong Java Park around 25m in length and the one in the Orchard Road area about 480m long.

Vehicular parapets are generally used to contain traffic and prevent it from infringing onto adjacent carriageways.

However, the barriers at these two locations will also serve an added purpose of preventing water from the adjoining properties from spilling over onto the expressway, said a Land Transport Authority (LTA) spokesman yesterday in reply to media queries.

A tender was called by the LTA last week to engage a contractor to carry out the works in Kampong Java and Orchard Road, which will be completed by the end of next year.

The tender will close next month.

Two canals run close to the stretches of the CTE where the walls will be built.

The Straits Times understands that there have been no flooding incidents at those two spots, but the parapets are being built as a preventive measure.

In the Orchard Road area, where the CTE cuts across the Stamford Canal, near to Kramat Lane, works are already under way to ease the load on this canal.

The PUB is building a new 2km-long diversion canal, which is targeted for completion in 2017.

Overflows from the Stamford Canal, which runs below the shopping belt, was blamed for the flooding incidents in Orchard Road in 2010 and 2011 during the monsoon seasons.

The upcoming works on the CTE are not expected to cause any major traffic disruptions.

According to tender documents, any lane closures will be carried out only during off-peak hours, such as in the wee hours of the weekdays.