Cyclists on pavements who cause injury can end up in jail 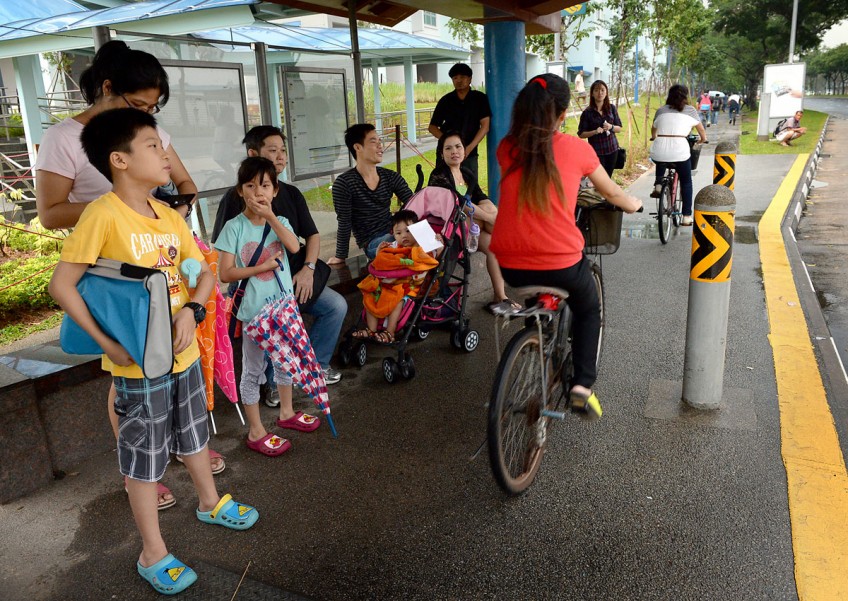 It was a benchmark case in more ways than one.

Lim Choon Teck, 35, was the first cyclist to be taken to court for riding on a pavement meant for pedestrians after he knocked down and injured an elderly woman.

His victim, Madam Chng Kian, 69, ended up with fractures on her right arm. Despite her distress, Lim sped away without bothering to help her.

When a District Judge jailed him for eight weeks on Sept 7 after he pleaded guilty to committing a rash act that endangered the safety of others, it produced another first.

The prosecution, which had recommended a two-week jail sentence, appealed to the High Court for the sentence to be reduced, something it had never done before.

Notwithstanding the twists and turns of this case, the signal to cyclists was clear: Those who ride on pavements meant for pedestrians and end up hurting others can end up in jail.

In a statement yesterday, the Attorney-General's Chambers (AGC) said this was the first prosecution of a cyclist using a pavement meant for pedestrians and that a firm stance would be taken against those who use personal mobility devices on pavements.

It said: "Cyclists and others who use mechanical or motorised means of transport on pavements ought to appreciate that if they cause injury and damage, they could be prosecuted. In appropriate cases, custodial sentences will be sought."

In the Sept 7 hearing, the prosecution cited several aggravating factors in seeking a jail term for Lim.

Lawyer Luke Lee said the case was an indication that the authorities are taking such offences very seriously.

"It is a clear signal that road safety is a priority and that those who break the rules will bear the full brunt of the law," he added.

"The fact that the AGC appealed is also a nod to the fact that the current Attorney-General used to be a sentencing judge at the appellate level, so he has a clear idea of what sort of sentences should be handed down.

"Sentences are not written in stone and the facts of the case need to be taken into consideration."

Road-users contacted by The New Paper were happy that the authorities are taking a strong stance against errant road-users.

Miss Shirley Ke, 33, who was hit by a cyclist at a bus stop at Hougang Avenue 6 on Aug 13, said: "At first I thought there was nothing, then I felt pain in my back. The uncle in his 60s just stared at me and made a sound that indicated his annoyance."

Miss Ke, who works in administration and still suffers from occasional back pains, added: "He didn't apologise, and he waited for me to move. I think he was annoyed because I obstructed his path. I was stunned."

Another pedestrian, who wanted to be known only as Madam Siti, said she had a close shave with a speeding cyclist while walking on a pavement with her three-year-old grandson in Tampines last year.

The 68-year-old retiree said: "My grandson and I could have been injured if we had been hit. He is young and I'm not strong. I'm glad that the authorities are taking this problem seriously."

Cyclists are also happy that the authorities are acting against errant cyclists.

Recreational cyclist Edwin Loh, who works in the oil and gas industry, said some black sheep have given cyclists a bad name.

The 27-year-old, who rides a road bike, added that enforcement and education have to go hand in hand.

"With space constraints, future development must take into account transport options such as bicycles. There is progress, such as the implementation of cycling networks, but it has been slow.

"When paths are more clearly demarcated, it helps all road-users to be more aware of their surroundings," he said.

On Wednesday, the Singapore Road Safety Council advertised in The Straits Times to invite tenders for a Cyclist Education Programme.

The council's chairman, Mr Bernard Tay, said the increase in road-users, Lim's case and the stance taken by the authorities have sent a clear signal to all road-users that safety is of paramount importance.

"It serves as a warning to cyclists to be extremely careful as injury to pedestrians may land them in jail," he said, calling it a "wake-up call".

This article was first published on September 19, 2015.
Get The New Paper for more stories.