The dancer who dares 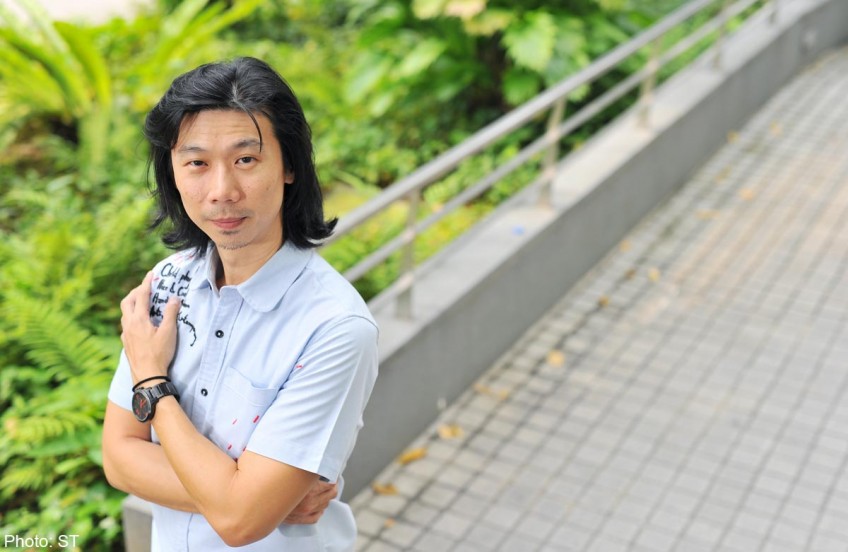 SINGAPORE - Like many parents, Ricky Sim's mother and father are proud of their oldest son.

"On one hand, you feel quite honoured that your parents endorse your job. But on the other, it can be quite malu (Malay for embarrassing)."

As one of the few Singaporean male dancers in the history of the Singapore Dance Theatre, he is an imposing presence. His carriage is ramrod-straight and his shoulder-length hair flares out like a lion's mane.

During the two-hour interview at the National Library Building in Bugis, he does not speak but asserts, throwing the full weight of his conviction behind every sentence.

Although his unconventional career route now has the full support of his parents - a businessman and housewife - it was not always the case.

Despite the substantial achievements under his belt - a performing stint in Europe, a diploma and degree in dance, as well as his own education and performing companies - the first time he pulled on a pair of ballet tights was in defiance of his parents.

Describing them as "very traditional", he recounts how his first encounter with ballet as a Primary 1 pupil in Serangoon Garden South School was cut short after a year.

As he was a hyperactive child, his teacher recommended joining the ballet co-curricular activity, hoping it would burn off some of his excess energy.

"I did not last long though because my mum pulled me out. She said that none of her boys were going to dance."

Sim, the oldest of three children, has a sister, 43, and brother, 41. Because of his parents' objections, he could only continue his dance training on the sly.

While doing a diploma in graphic design at Temasek Polytechnic, he came across a newspaper advertisement for night classes at the Nanyang Academy of Fine Arts (Nafa).

After signing up, he attended school during the day and dance classes at night. To earn enough to keep himself going, he gave tuition and waited on tables.

To keep up the charade, he even did his own laundry. "It was tough because I had to wash my own tights. I washed them when my mum was away and dried them in the afternoon or at night, then I would have to wake up early just to take them in before she saw them."

Leading a double life took such a toll on him that in the final year of his diploma studies, when he had to prepare his final portfolio for assessment, he ended up sleeping just a few hours a night.

"Once, I even went to school in my boxer shorts. I'm not kidding. At that point, I just didn't care. Now though, thinking back, why would I even do that?"

Sim managed to keep his tights top secret from his parents for two years before he absent-mindedly left them hanging on a bamboo pole to dry.

"My mum found my green tights and asked my sister: 'Are these your new leggings?' My sister said: 'Green is not my colour and that's not my size'."

After he was accidentally outed by his laundry, his mother was furious and demanded that he quit. "My mum told me to stop because men should not dance. I just brushed it off and continued."

Pensively, he adds: "That was first and strongest defiance against my parents because since then, I have not stopped."

After he completed his diploma in graphic design and national service, he joined Nafa's dance diploma programme full-time.

It was there that he met some of the pioneers of the Singapore dance scene, such as Cultural Medallion recipient Angela Liong, who now heads contemporary dance outfit The Arts Fission Company.

Liong, who was then head of the dance programme, remembers Sim as an organised, conscientious student.

"He has always been a very meticulous person and his work reflects that," she says. "He was so serious and it was only in recent years that I've caught a certain kind of biting humour coming out."

However, Sim's most important takeaway at the school was not skills or knowledge, but meeting his future wife, Wong Wai Yee.

Liong inadvertently matchmade the two when she introduced them to each other. Wong had needed a male partner for her graduation project. "Wai Yee is the opposite of Ricky," she says.

Wong was a founding member of Liong's Arts Fission company and danced there for over a decade.

"Precision is not her merit, but she is very human, very warm and very fluid. They really complement each other."

Wong's first impression of Sim was a favourable one. "He was chatty and he had a charm with girls, if I can say so myself," she says. "I knew that he was going to be a positive energy in my work, even though at that time he was lacking in technical skills."

The couple married in 1997 and have no children.

In a fortuitous twist, Sim's big break in the professional dance scene came even before he left school.

In his final year of study, Goh Soo Khim, who was then the artistic director of the Singapore Dance Theatre, saw him performing in a showcase and invited him to attend company classes.

His showing was impressive enough that after graduation, he joined the company as an apprentice and was promoted to full company member after two years.

He counts among his contemporaries at the company Jeffrey Tan, who is now the principal of the Singapore Ballet Academy, and Kuik Swee Boon, artistic director of T.H.E Dance Company. Of his time at the company, he says: "It was enjoyable, it was fun, it was learning, a lot of torture, good and bad memories."

After six years with the flagship classical company though, he decided that he wanted more.

He was hungry for a challenge which he could not find in the comfort of home and he felt the pressure to make good a classical dancer's short shelf life.

So he decided to expand his horizons in Europe. "After a long talk with my wife, she said only one thing: 'Please come back'," he recalls.

The three-month backpacking sojourn he embarked on took him to places such as Germany, Switzerland, Belgium and Holland. He zipped around by train and in the days before the euro, his bag was stuffed with different currencies.

He auditioned for anything he could find, in classical companies and contemporary troupes and worked on independent projects, before eventually being offered a soloist contract by Germany's Theater Nordhausen.

When he recounts his time in Europe, it is clear that the experience was a turning point for him.

Even thinking back to it seems to electrify him as he spoke of how the training ran the gamut from classical to contemporary to theatre. "It was totally cool stuff in the early 2000s. It drove me to think about the classics differently."

His swan song with the company was Sleeping Beauty, which had the princess mired in a web of drugs and alcohol, roughing it out on the streets.

"I played a gangster in torn jeans but on pointe shoes. Do you know how cool that was? I had a bandana, it was really chao ah beng (Hokkien for hooligan)."

His stint in Europe lasted two years before it was cut short by the pursuit of further education. He received the Shell-National Arts Council arts scholarship in 2001 to study for a master's of fine art in dance at Australia's Queensland University of Technology.

Pursuing further studies, however, meant extending the time away from his wife, who was still based in Singapore.

Wong, 48, says: "At that time, there was no WhatsApp and not much technology. I had to work very hard to save money for a ticket to visit him."

His time spent overseas may also have been a contributing factor to the couple not having any children.

Although Wong says they have come to terms with that fact, the strain in her voice is evident when she speaks of it.

"Now, I can say this casually, but we were keen on having a family. We were derailed by things like his Europe stint and other things later on."

After Sim returned to Singapore, he decided to turn their passion for education into a career. They set up Moving Arts Studio in Bishan, a dance education company which runs courses for children and adults.

Five years ago, he founded the contemporary dance company, Raw Moves. Today, it is one of the most exciting groups in a burgeoning scene.

There are no rules for him and he takes the notion of dance very loosely.

At a media preview for the company's upcoming performance, R.e.P 2015, the scent of freshly baked lemon cookies wafted over as a dancer mixed and baked cookies on stage as part of Ebelle Chong's SSLD:7.

Last July at Free, dancers had their shoes moved around by cheeky audience members who were scattered all around Goodman Arts Centre's Black Box.

Sim's disregard for dance norms may sometimes seem gimmicky or more style than substance, but in a scene where the dictionary definition of dance is by and large strictly adhered to, it is certainly a refreshing change.

What makes him such a formidable artist is his fearlessness, honesty and discipline? He runs a tight ship and he is not afraid to keep it that way.

At the aforementioned media preview, one writer had not arrived by the 2pm start time. The moment the minute hand ticked to 12, he began tapping his watch impatiently. "Is she coming? Call her," he ordered as someone scuttled off to contact the writer.

This exacting standard permeates his working process as well. Dancer Matthew Goh, 22, who has been with the company since it started five years ago, appreciates Sim's sometimes brutal frankness.

"He has a sharp eye and is very honest when it comes to giving me notes. I really feel myself getting shot at as he goes through each point. It is painful but honest," he says.

"I learnt a lot from the honest feedback. Without it, I might still be stuck in my comfort zone."

Sim may sometimes be direct and harsh but it is the dancers' growth which is paramount for him. When asked what are his hopes for the company, he says: "I hope my dancers will continue to learn. That's why I spend a lot of time thinking about the programming, collaborations and platforms. I have a job and I can keep doing it for the rest of my life, but then I'm not helping the dancers."

There are six dancers in the part-time company and as all have day jobs, rehearsals are in the evenings and on weekends.

As the company looks back on five years of history, he is looking to go full-time next year and also to overhaul the company's current platforms to focus more on the community at large.

This is in line with his vision that dance is not just for a select few, but for everyone. "If today, a fishmonger comes up to me and says, 'Ricky, I want to do a fish dance', I would tell him to give me his concept, we'll talk about it and then we'll see how it can work."

His company is about building a bridge between dance as an art form and the community. "I also want to work with people who are not trained in dance, to elicit their expressive selves and to let Raw Moves be that catalyst.

"We are all creative animals. It's just two things you have to ask yourself: Do you want to? And do you dare to?"

For him, the answer to both these questions is a resounding "yes".