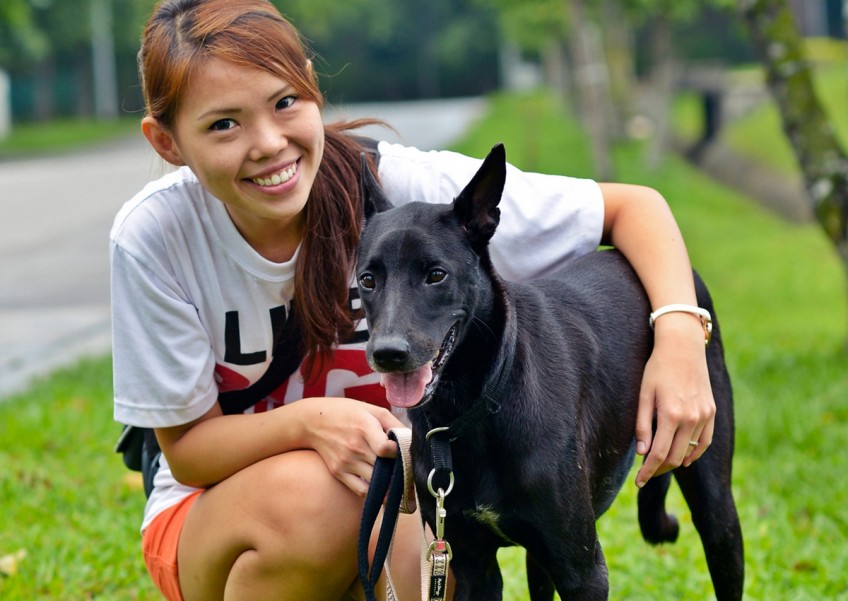 Volunteer Lee Jie Ying, 27, with Tux, which took three years to find a home because of its colour and timid character, which was improved after months of rehabilitation.
SOSD

And that means that these dogs end up at the bottom of the pile when it comes to adoption, according to animal welfare groups here.

Now, one group hopes to stop the discrimination.

This month, SOSD, formerly known as Save Our Street Dogs, launched a social media campaign to encourage Singaporeans to open their hearts, and homes, to these overlooked canines.

At SOSD, it takes three times as long to rehome black or tan dogs compared to white or cream ones, even if they share similar temperaments. Black dogs which are timid or unfriendly could be left unadopted for more than two years.

"The worst case scenarios are black dogs with white paws. These dogs are compared to mourning garb worn at funerals, and are thought to bring grief and death to the family," said SOSD president Siew Tuck Wah.

The issue has become a more pressing one for the group after it took in more than 20 black dogs off the streets in the past two months. "With limited shelter space and resources, this will mean we can rescue fewer dogs in need while existing black ones wait for homes," said Dr Siew, explaining why his outfit has launched its campaign.

On both Facebook and Instagram, users can upload photos of their black or tan dogs with the hashtag #fiftyshadesofpawsome to show how, just like their fair-skinned canine counterparts, they can be great companions.

More than 250 entries have been received so far, said SOSD.

At Hope Dog Rescue, none of the 14 black dogs currently under its care of have received any inquiries for the last three years, said founder Fiona Foo. This includes its longest resident, Happy, which was found tied to a bench at Bukit Merah when it was about six months old. Similarly at Mutts and Mittens, the 10 black or tan street dogs it has taken in over the last five years have not been adopted.

The bias against black dogs, commonly termed "black dog syndrome", is most relevant when adopters meet a dog for the first time, said a spokesman at Gentle Paws. "The potential adopter will, generally, be uncertain of the dog's temperament and black dogs are generally harder to gauge or assess. It's more difficult to make out their facial expressions," added the spokesman.

Founder of Action for Singapore Dogs, Mr Ricky Yeo, believes in extolling the dogs' personality traits rather than their appearance. Together with some animal welfare groups, he remains positive that a younger generation of pet owners, who tend to be less superstitious, may slowly reverse this trend.

Mr Leroy Ong, 24, who recently adopted a 21/2-year-old black miniature schnaupin named Dobby, said: "Colour was never an option. For us, it is about the temperament of the dog and how it behaves around us."

The teacher added: "Dobby is fun to be around with... He is a quick learner of tricks and always eager to please. We've had him for about three weeks and he gives me a reason to want to go home sooner."