The dark side of online markets for buying drugs 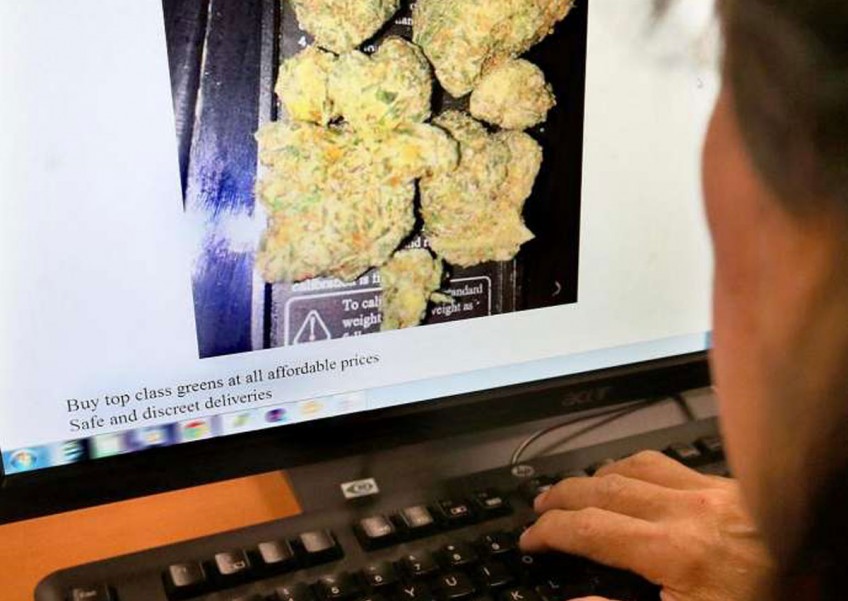 An online marketplace advertising the sale of drugs.
The New Paper

In search of a greater "kick" to satiate his appetite for marijuana, Jack (not his real name) went online. But the websites he visited are not easily found by the average netizen.

Instead, these are online marketplaces on the "Dark Web" - a hard-to-access part of the Internet often used for illegal activity - that allow users to buy not only marijuana, but also substances such as cocaine, methamphetamine and other synthetic drugs.

On these sites, drugs are shipped globally and payment can be done through an escrow account - meaning money is transferred after the transaction is fulfilled.

Jack, now a 23-year-old polytechnic student, said he was given website links by his friends, who told him that he could find better-quality drugs online.

"People go online because they think it is safer, and that they can try to hide their IP (Internet Protocol) address. They get the drugs straight in their mailbox," he told The Straits Times.

Jack bought 25g to 50g of marijuana "once or twice" in two months, about two years ago he said.

But he has been caught for consumption and possession of paraphernalia, and is undergoing counselling at the Singapore Anti-Narcotics Association.

Like him, more young drug abusers have been found turning to the Internet for their purchases.

The latest Central Narcotics Bureau (CNB) figures showed close to a sevenfold increase in the number of people arrested for buying drugs or related paraphernalia online.

The number of online drug buyers accounts for a fraction of the total of 3,245 drug abusers arrested last year, with offenders under 30 making up about 41 per cent.

In a recent case on March 3, a student aged 26 was arrested for buying drugs online, after the CNB was alerted to a parcel suspected of containing 136g of cannabis.

ST recently saw one of the sites on the Dark Web which showed listings for sellers of "benzos", "opioids" and "psychedelics", among other substances.

Sellers are rated on their "stealth" and quality of products.

A listing for heroin, based abroad, for example, offered "free samples" of its "high-quality" product as well.

There are also listings under "Singapore", where people here inquire about purchases, with some sellers assuring potential customers of drug deliveries. Others use the platform to look for fraudsters.

A former drug user in his 40s who declined to be identified said that besides such marketplaces, some sellers route their payments through legitimate businesses in an attempt to evade detection.

He called the online buying process "no different from (using) any online blogshops, supplement stores and legitimate businesses".

He said buyers, who include university and junior college students, arrange for a "drop-off" or have the substances delivered through the postal system if they do not meet the seller.

Mr Ang Thiam Hock, 53, a former sales consultant who spends time with at-risk youth in his personal capacity, said though youth are more tech-savvy these days, not all may know how to buy drugs online.

"Some buy in small quantities as and when they have the money, while others do not have access to Web payment methods, making online buying an unlikely option," he noted.

Another former drug abuser, Joe (not his real name), who used to buy drug paraphernalia online, said it is common for people to tout drugs on private social media groups, or forums.

"While people may try to quit drugs and share their personal experiences on forums online, pushers sometimes take advantage of the situation," said the 33-year-old operations manager, who is currently a resident at Pertapis Halfway House.

"If they know that you're trying to detox and cannot cope, they will start to give you more information, and say that they are willing to send the drugs to you," he added.

"If your willpower is not strong, you just give in to whatever they are trying to sell you," he said.

He added that while such "pushers" may be based overseas, they often have accomplices in Singapore who can reach out to users here.

The temptation is a lot stronger for youth today, as many of them have ready access to the Internet via their phones and computers, unlike in the past, said Joe.

He was caught in 2015 for buying smoking apparatus for methamphetamine at $15 apiece on a mobile-marketplace app - which he had done six to seven times during that year.

When he met sellers to collect the goods, they asked him no questions, he said, and sometimes told him in advance about new products or code words they were using. "It used to be quite hard to get these instruments; usually you'd be able to get them only overseas," he said. "But, through these platforms, it becomes quite easy."