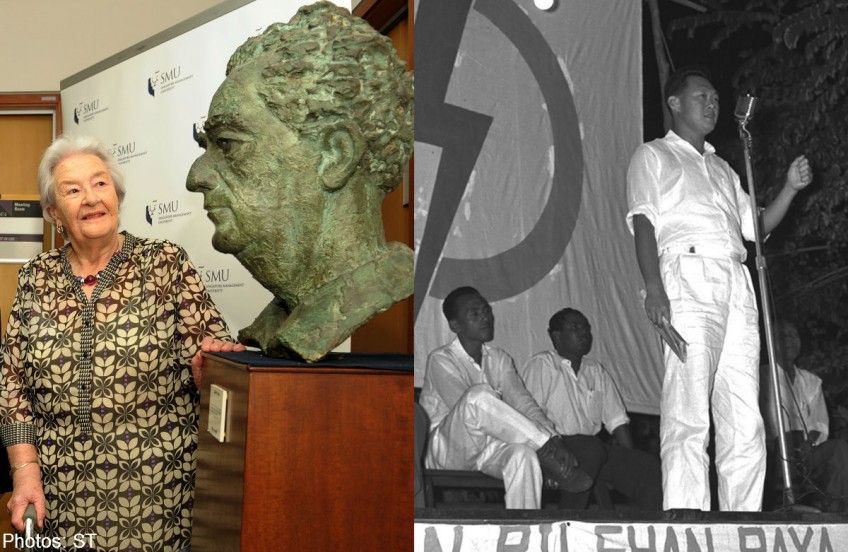 Left: Mrs Marshall, with a bust of her husband, David Marshall in 2011. Right: The Prime Minister, Mr Lee Kuan Yew, speaking at a by-election rally in Raub Street in 1961.

Before I knew either Mr Lee Kuan Yew or David Marshall, I remember being at a political meeting at the university in 1957 or 1958. I can't remember the circumstances, but both David and Mr Lee spoke on the future of Singapore.

After my years at the London School of Economics, I was not unfamiliar with political speeches. But it struck me that here were two exceptional speakers of great difference in their styles.

Mr Lee was a master of silence and the pause. He could pause and everybody would be absolutely on edge as to what he was going to say next. David had a different, sometimes more oratorical, style. He could inspire people and take them out of themselves to be something bigger than themselves.

Both of them were of course lawyers of some eminence, and I think they both respected each other as lawyers. But David had a very different personality from Mr Lee and it was at times difficult for them to appreciate each other because they really looked at life in very different ways.

David believed that every human being has value, and that the individual has a value that can't be ironed out because every individual is worthy of respect and is important.

Of course this is difficult when it comes to working out public policy. But it did permeate his views about Singapore's post-colonial status, the need for independence, and the need for public participation in the political process.

It also permeated his professional life and the way he fought in court - not necessarily for high fees either - but for people he thought would otherwise be denied justice.

This outlook could place him at odds with the systematic planning and thinking that Mr Lee and his team had, from the very beginning, planned, worked on and maintained for years and years.

For instance, one policy to which David took great exception was the "stop at two" policy. He was very against that and said so. He felt it was taking away a very fundamental right for people to choose to have or not to have children.

Mrs Lee was very friendly. We talked about knitting patterns, education policies, children - all kinds of things. I was very relaxed with Mrs Lee and I think she was relaxed with me. I was not relaxed with Mr Lee. He could be very, very acerbic.

We would host them for dinner when David was ambassador to France from 1978 to 1993 but I was never relaxed. I think Mr Lee was probably just as awkward with David as David was with him. They were painfully correct with each other and Mr Lee then probably still regarded David as a bit of a maverick - though he did later express appreciation for David's work in France.

David had immense admiration for what the PAP team had achieved in Singapore.

Let nobody say that David held back in paying tribute to the achievements of Mr Lee and his government!

Mr Lee's way of doing things was different from David's, but David said, and not only to me, that he could never have achieved what the PAP had achieved through its organisation, cohesiveness and sheer abilities.

David saw the PAP as a juggernaut which did iron out legitimate opposition at various times in its history. I think it would be very difficult for David ever to forget that.

But he would be very capable of openly showing admiration for many of the ministers and PAP people who concern themselves with some of the issues that David was concerned with.

For instance, all the conversations that have been taking place about the people who feel left out, the people who are being left out. There is a real concern, for whatever reason, among the ministers and PAP of today about that group. That's a group that David certainly would have been concerned about.