#gardens by the bay 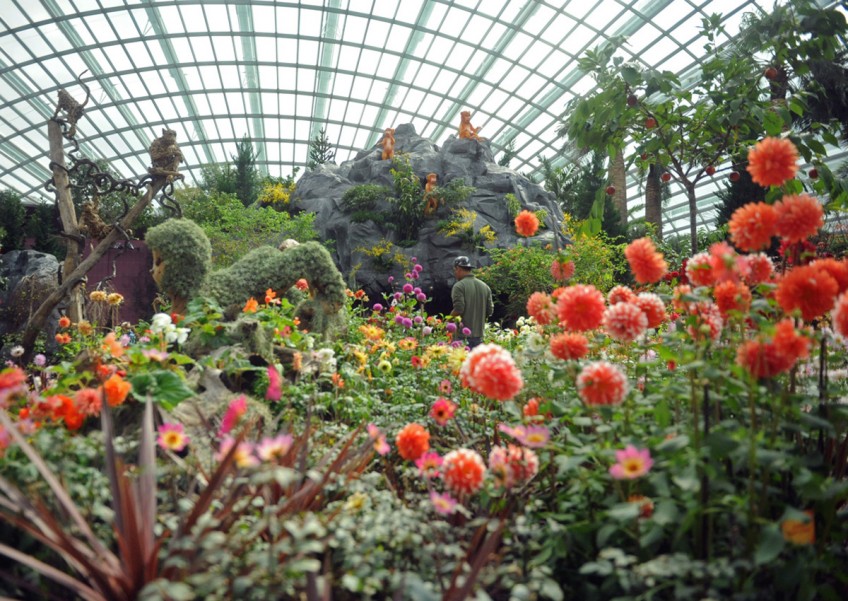 A 7m-tall mountain pays homage to Mount Huaguo in the Chinese novel Journey To The West, believed to be the birthplace of its protagonist the Monkey King.
The Straits Times

Show-stopping dahlias, with their big blooms and colourful hues, are making a comeback at this year's Chinese New Year display at Gardens by the Bay, after the flowers were warmly received at last year's show.

Aside from ringing in the new year, there is more cause for celebration as the Gardens' team of researchers and horticulturists have managed to grow a quarter of the 200 dahlia cultivars on show this time around - a stronger crop than last year.

Housed in the Flower Dome, one of the two cooled conservatories at the attraction, this year's display is named Dahlia Dreams.

The team decided to go with dahlias again as it wanted to "build on tradition", says Dr Adrian Loo, 44, director of research and horticulture at the Gardens.

He adds: "Having seen last year's display, many people are looking forward to see the dahlias again as they are hard to come by in Singapore. But to keep the concept new, we have added other plants such as begonias and rudbeckia."

About 50 of the dahlia cultivars on show this year are home-grown.

While the first show was to experiment with how the temperate flower would grow here, the second round had the horticulturists trying different gardening methods on the dahlia plants and making them grow bigger, for example.

The dahlia, which is the national flower of Mexico, is not typically grown in a warm climate such as Singapore.

The team started planning for this year's show by saving most of the dahlias' tubers from last year, and "put (them) to sleep" for months, says Dr Loo.

This "horticultural magic" took place in glasshouses at the HortPark, off Pasir Panjang Road. Aside from dahlias, the six glasshouses there are used primarily as a research facility to test optimal growing conditions for some plants from cooler climate regions, as well as nurse plants back to display condition and induce some plants, such as the Foxglove, to flower.

First soaked in a fungicide, each dahlia tuber is nestled underneath shredded layers of paper and stored in a cold room at 5 deg C.

When the horticulturists are ready to use them, the tubers are placed in soil and watered.

As the plants grow, the team uses various horticultural techniques such as disbudding some of the plants, so that the number of flowers on the plant are limited.

With fewer flowers to feed, the plant channels the sugar produced from photosynthesis into the blooms, making them much bigger - a highlight of this year's flowers.

Some of the plants also go through "pinching" - a pruning method that encourages branches to grow out for a more luscious plant.

Dahlias take about two to three months to grow and their blooms last for two to three weeks. These dazzling beauties are part of the Asteraceae plant family and are related to the chrysanthemum, daisy and marigold plants.

As space in the glasshouses is limited, the rest of the dahlias are grown in Cameron Highlands, where the temperatures are cooler.

The tubers are bought from prized dahlia breeders in Australia, New Zealand and Holland.

Dr Loo says that growing its own dahlias is part of the Gardens' ethos of honing its expertise.

"While we bring in plants from around the world to showcase at the Gardens, we also see how best we can get them to grow under controlled conditions in Singapore's climate," he explains.

"It also helps us control the quality of the plants better, as not all plants shipped from overseas take the journey well."

This year's display, which is on till Feb 28, takes inspiration from the Chinese novel Journey To The West.

A field of dahlias takes centre stage and, in keeping with the theme for the Year of the Monkey, there is a 7m-tall mountain with a Water Curtain Cave. It pays homage to Mount Huaguo, or the Flowers and Fruit Mountain, said to be the birthplace of the Monkey King, or Sun Wukong, the protagonist of the novel.

Monkey lanterns are perched on top of the mountain, while six monkey-shaped topiaries, made of airplants and dried leaves of the Breadfruit tree, are spread out around the display.

Mr James Doran-Webb, an English master craftsman who salvages driftwood from beaches and rivers, used the wood pieces to create a sculpture installation of a family of seven monkeys playing among the dahlias.

He is the same artist who made driftwood goat sculptures for last year's installation.

Much attention is paid to the display even after it has been set up.

Do not be surprised to spot new flowers if you return multiple times, as the Gardens' team switch out plants that are wilting. The display has to look fresh throughout the six weeks it is on show.

Dr Loo says: "The work happens overnight when the dome is closed. Gardeners will remove plants that may not do as well as others.

WHERE: Flower Dome, Gardens by the Bay, 18 Marina Gardens Drive

[[nid:259050]]
#gardens by the bay
SUBSCRIBE TO OUR NEWSLETTER
Your daily good stuff - AsiaOne stories delivered straight to your inbox